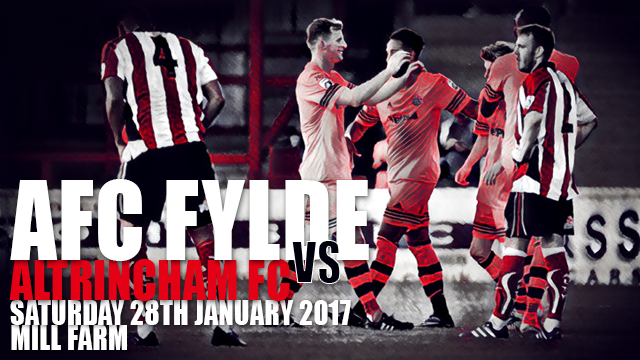 A brace from top scorer Danny Rowe sealed a second home win in five days as AFC Fylde saw off basement club Altrincham to remain nine points clear at the top of the National League North.

Rowe netted twice in the opening 20 minutes, before Macauley Wilson added a third inside half an hour. The visitors pulled one back on the stroke of half-time but substitute Matty Hughes put the result beyond doubt with a late strike.

Full-back Wilson returned to the starting line-up after recovering from injury, whilst Bohan Dixon replaced the injured James Hardy in midfield.

The visitors almost took a shock lead inside the second minute when a hopeful ball across the box found Elliott Newby who stuck a curling first time strike against the far post.

A poor back pass at the other end of the field played in Dan Bradley, but the goalkeeper recovered well to flick the ball away from the midfielder’s feet with the goal at his mercy.

Bradley went closer still a moment later when And Bond’s strike was deflected into his path, but he curled the ball over the bar from 18 yards with the goalkeeper stranded.

A goal was coming and it duly arrived in the 10th minute. Rowe received the ball on the edge of the Altrincham penalty area and after twisting a turning into space, unleashed a sublime left-footed strike into the top corner.

The frontman doubled his tally just eight minutes later with an equally stunning effort. Bond was felled 20 yards from goal and up stepped Rowe to whip the ball over the wall and past the helpless stopper.

The goals continued to flow for the league leaders as Wilson added a third. Bradley swung a cross in from the right that found Rowe and although the striker was denied his hat-trick by Tim Deasy, Wilson was on hand to lap up the loose ball from a yard out.

The Fylde front line were causing havoc and Deasy had to pull off a great save to deny Bradley after he had sneaked into the box from the left.

Fylde looked content to sit back on their three goal lead however inviting pressure was to prove costly a moment before the break when Altrincham striker James Lawrie tucked away with ease from Andy McWilliams dangerous left-wing cross.

Fylde were almost made to rue not putting the game to bed when the visitors were presented with a glorious chance shortly after the break. Andy Owens was played through by Newby but the forward’s well struck effort across goal was agonisingly wide of the far post.

There was nothing between the two sides during the opening stages of the second period, with both teams looking nervous of conceding again. Matty Hughes was introduced as manager Dave Challinor looked to add a spark to the Coasters performance.

If anything, it was Altrincham that looked the more dangerous and Lawrie fired narrowly over from the angle as they searched for a way back into the match.

However, the prospect of any potential comeback was ended with a fourth goal of the game 15 minutes from time. Brendon Daniels broke down the left and squared for Bradley in the box and whilst the defence intervened, super-sub Hughes lashed home the rebound from close range.

The goal had finally given Fylde some momentum and Bradley took aim a minute later, however his wild swipe was well over.

Rowe was still on the hunt for his treble and went close with a powerful free-kick to the left of centre that was palmed away by Deasy. Daniels tried his luck from distance as the hosts looked to put the icing on the cake but dragged his effort wide.

Robins captain Jake Moult summed up the day for the visitors when he ballooned a set-piece a mile over the bar from the edge of the box.

Substitute Simon Richman almost found a consolation goal in the final seconds when he met Moult’s cross from the right but Rhys Taylor pulled off a fantastic stop at point-blank range.