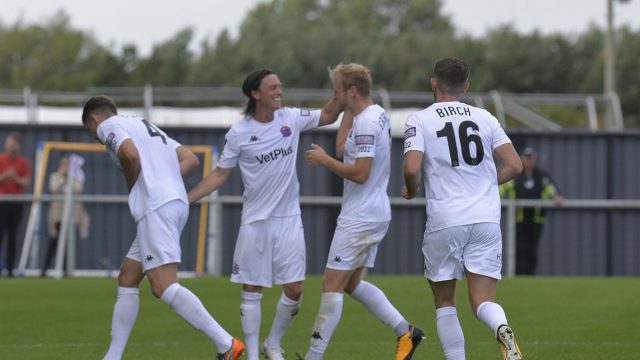 AFC Fylde made it five games unbeaten with a comprehensive 4-0 win over Dover Athletic at Mill Farm.

A brace from Danny Rowe and goals from Joe Cardle and James Hardy earned the Coasters all three points against last season’s playoff rivals.

Manager Dave Challinor named the same team that had seen off Solihull Moors on Tuesday night and they picked up where they left off creating several good chances early on. The first big chance fell to Danny Rowe who placed his header just wide of the far right corner after meeting a lovely clipped cross from Joe Cardle.

The Coasters thought they had taken the lead on the quarter hour mark when Neill Byrne powered a header past Walker from a Cardle free-kick but the linesman’s flag was up for offside.

Dover looked dangerous down the right-hand side with Passley causing Francis Angol some issues but the Fylde defence limited them to only a handful of half chances. Inih Effiong
saw a curled effort tipped over by Lynch early on and on the brink of half-time flicked a Passley cross just wide of Lynch’s far post.

The Coasters deservedly took the lead four minutes before the break as a goal kick from Lynch was controlled well by Rowe who turned and fired the ball past Walker into the bottom right corner from the edge of the box. A challenge a couple of minutes prior saw Luke Burke down for several minutes and he was replaced straight after the goal by Arlen Birch.

Fylde made it two just four minutes into the second half. A quickly taken free-kick ended with a cross from the right from Joe Cardle which looped over Mitch Walker and came back off the left post and in. Dover tried their best to respond but a blocked effort from Brundle was all they could muster.

The powerful Gime Toure replaced Joe Cardle on the hour mark with the winger receiving a standing ovation from the Coasters supporters. Toure nearly got himself on the scoresheet with 15 minutes to go having been picked out by Philliskirk on the edge of the penalty area but his effort was deflected over for a corner.

Another Fylde counter-attack saw Rowe find Toure down the left-hand side who played the ball back for Philliskirk but his powerful effort was well saved by Walker.

Fylde made the game safe with five minutes to go. Rowe’s pass to Hardy was superbly flicked on by the young midfielder into the path of Toure who beat his marker for pace before being bundled to the floor six yards from goal giving the referee no option but to point to the spot. Dover keeper Walker guessed the right way but the power on the spot kick from Rowe was too much to keep out.

The icing on the cake was to follow in the final minute of normal time as James Hardy was put through one on one before chipping Walker from 12 yards.

Fylde remain unbeaten this season and climb to third in the table ahead of next week’s Bank Holiday weekend doubleheader against Sutton United and Harrogate Town.
Tickets can be purchased online by clicking here, or by contacting the Club Shop on 01772 598855.