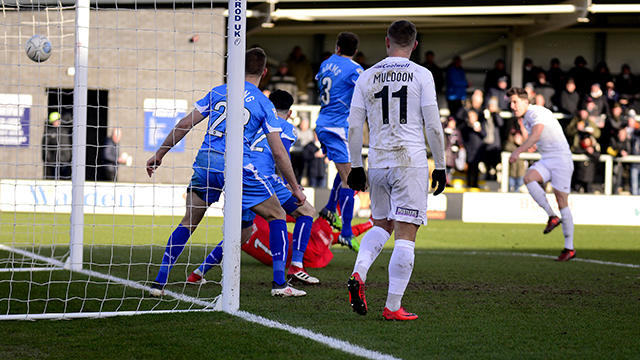 Two stunning goals in the dying seconds earned Hartlepool United a share of the spoils in a thrilling 3-3 draw at promotion-hopefuls AFC Fylde.

Andy Bond’s unlikely double and a third from James Hardy had overturned Jordan Tunnicliffe’s own goal, however long-range strikes from Jake Cassidy and Devante Rodney claimed a valuable point for the visitors in their relegation battle.

Dave Challinor was forced into making one change to the side that demolished Aldershot Town last weekend with midfielder Callum Chettle handed a rare start in place of the suspended Sam Finley.

The hosts were given an early scare in bizarre weather conditions at Mill Farm when Cassidy broke clear, however Zaine Francis-Angol, who swaps the British winter for international duty in Antigua next week, made a fantastic saving challenge.

Serhat Tasdemir got to the byline at the other end, although his final ball across goal gave Liam Donnelly chance to clear on the line.

Coasters forward Jack Muldoon flashed one across goal and a foot wide of the far post during an open start to proceedings.

Chances continued to flow and Conor Newton should have done better when he met Rhys Oates’ low cross, however his first time effort from six yards flew wide.

Muldoon was proving a handful and went closer still with a snapshot from the edge of the area that had to be palmed around the post by former Watford stopper Scott Loach.

Loach was called into action once more midway through the half when he got his body behind Danny Rowe’s powerful free-kick.

Visiting striker Cassidy fluffed his lines straight up at the other end after Michael Woods has broken clean through, lifting his effort over the bar from 12 yards.

Louis Laing almost inadvertently set up the opener for Coasters hitting his clearance against Adams however Loach got down to clear the goalbound ball.

The opener arrived five minutes before the break and the Coasters were the masters of their own downfall. Adams sent a hopeful ball in to the box and Jordan Tunnicliffe’s wayward header drifted past a despairing Jay Lynch into his own goal.

The hosts continued to press as Chettle hit a tame strike at goal before Simon Grand crashed a piledriver well over from distance in the last action of the half.

Fylde took just one second-half minute to level the scores. Substitute Jonny Smith crossed low from the left and although Bond’s initial effort at the back post was blocked, the midfielder smashed the rebound into the roof of the net.

Bond took just nine minutes to grab his second, cutting inside from the left before curling a sensational strike into the top right-hand corner.

A quick break from the home side saw Muldoon race away and square to Smith who tested Loach with a low effort and the young winger though he had extended the lead with 20 minutes to go when he tapped home after Rowe’s powerful free-kick was well blocked, however the linesman cut short celebrations.

Fylde were coasting and added a third when Muldoon burst down the right before putting the ball on a plate for Hardy to stroke home.

Cassidy ensured it would be a nervy ending when he lashed in a stunning strike from 25 yards and the comeback was complete in the third minute of added time when substitute Rodney picked out the top corner from a similar distance to send the visitors into raptures.