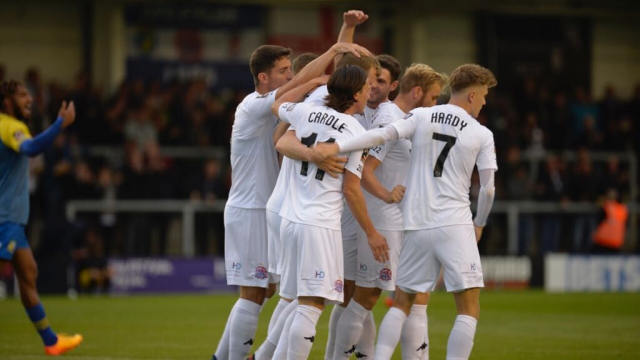 An early goal from Danny Rowe, a sensational 50-yard strike from Andy Bond and a first Fylde goal for Gime Toure earned a solid win against ex England keeper Tim Flowers’ side.

Manager Dave Challinor recalled Joe Cardle to the starting eleven in place of Gime Toure as they reverted back to their usual 4-3-3 formation.

The Coasters took the game by the scruff of the neck early on and grabbed an early advantage through a very familiar source. Neat passing play from Joe Cardle and Zaine Francis-Angol created space for Cardle to pick out Rowe just inside the penalty area. Rowe made no mistake drilling the ball home into the bottom right corner for his third goal of the season.

Andy Bond had his first effort on goal after 16 minutes following good work from Hardy but his low effort was eventually saved by keeper Ryan Boot.

Bond was not to be denied for long and he doubled the Coasters lead after 19 minutes in sensational fashion. A loose ball was launched at goal by Bond almost 50 yards out looping Boot in the Solihull goal and falling just under the crossbar to the amazement of just about everyone inside Mill Farm.

The visitors created several chances of their own shortly after. Former West Bromwich Albion midfielder Darren Carter had a free kick blocked before two identical long throws were flicked just past the far left post.

Fylde should have made it three on 24 minutes when a perfectly weighted pass from Cardle gave Rowe plenty of space on the edge of the box. He fired a powerful effort at goal which was spilt by Boot but somehow the rebound from Hardy was deflected off the post and cleared to safety.

Rowe tried his luck again and almost made it three curling a near 30-yard effort just wide of the far left corner.

The visitors started the second half brighter and almost instantly got themselves back in the game. A corner to the near post was diverted in from four yards out by Luke Maxwell to the delight of the travelling fans. Solihull would enjoy a 15-minute spell where they pushed the Coasters back and they almost levelled as Yussuf teed up Danny Wright at the near left side but he fired over when one on one with Lynch.

James Hardy was excellent throughout and his close control allowed Bond to set up Cardle whose shot from the left was deflected behind for a corner. The resulting corner saw the ball drop to Hardy six yards out but somehow his effort was blocked off the line via a terrific save from Boot.

Gime Toure replaced Joe Cardle with twenty-five minutes to play and within two minutes he had restored the Coasters two-goal cushion. An excellent driving run from Francis Angol ended with him playing a one-two with Hardy before his low shot was saved by Boot. Toure was on hand to quickly turn and fire the ball home from close range to make it three.

Serhat Tasdemir and Arlen Birch would come on towards the end for Danny Philliskirk and James Hardy, both receiving excellent ovations from the home crowd. Solihull nearly grabbed a goal back through fullback Jamie Reckord when his low shot from 10 yards came back off the right post and bounced fortunately into the grateful arms of Lynch.

Tasdemir could have made it four but his shot was saved by Boot when it looked destined to nestle into the bottom left corner. Adi Yussuf should have made it a nervy finish gliding past two Fylde defenders before dragging his shot wide of the near left post when it looked easier to score. This was to be the last major chance of the game as the Coasters responded well to Saturday’s disappointing second half at Havant and Waterlooville to further cement their position in the top seven and remain unbeaten after four games.

The Coasters are next in action on Saturday afternoon as they entertain Dover Athletic at Mill Farm.