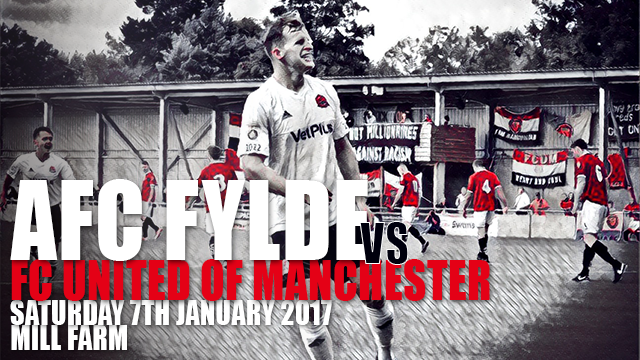 AFC Fylde continued their title charge with a well-deserved 3-1 victory over FC United of Manchester in front of another bumper crowd at Mill Farm.

Brendon Daniels and Dan Bradley gave the Coasters a two-goal lead at the break and whilst Harry Winter threatened to make it a nervy finale, substitute Matty Hughes put the hosts out of sight with his first goal of the season.

The Coasters are now an enviable nine points clear at the top of the National League North following Kidderminster Harriers’ defeat at Salford.

Dave Challinor named the same starting eleven for the second game running, following the 3-1 victory over Chorley on New Year’s Day. James Hardy and Steve Williams both returned to the squad after recovering from injury.

Former Fylde trialist Jason Gilchrist was close to opening the scoring inside the opening moments of the game when he met George Thomson’s deep cross at the back post but headed over when well placed.

Leading goalscorer Danny Rowe tested goalkeeper Adriano Basso with Fylde’s first real attempt of the afternoon but the keeper did well to hold onto his stinging effort from distance.

The unlikely figure of Macauley Wilson had a murmur of a penalty shout when he was played clean through by Dan Bradley however the full-back more likely lost his footing and the referee waved play on.

The impetus was with the hosts as Brendon Daniels fired a routine free-kick into the grateful arms of Basso.

The lively Bradley was the width of the woodwork from opening the scoring shortly after the 20-minute mark when he cut in from the left and whipped a fantastic strike at the FC United goal, only to see his powerful effort cannon back off the crossbar.

The deadlock was duly broken just before the half-hour and it was a deserved goal for the hosts. Rowe fizzed in a low cross from the right and Daniels beat his man to the ball at the front post and slotted home.

The visitors had a glorious chance to get themselves level when Chris Chantler delivered a dangerous ball to the back post for Thomson but Rhys Taylor was more than equal to the forward’s volley.

FC United went closer still a moment later when captain Jerome Wright broke into the box and lashed a low strike across goal and off the far post.

No sooner was the ball back in play, the Coasters had doubled their lead. Bradley was picked out by Rowe and raced towards goal before cutting inside his man and rolling the ball into the bottom corner past the helpless goalkeeper.

Karl Marginson’s side seemed to have had the stuffing knocked out of them, Chantler trying his luck from distance as the bewildered visitors looked for a way back.

Thomson was looking the main threat for the away side and again tested Taylor with a low shot from the edge of the area that was comfortably claimed.

The Coasters were well and truly controlling proceedings as the fog descended and almost had a third when Bond intercepted on the edge of the area and squared for Rowe but his shot was deflected narrowly wide.

Thomson was a whisker from pulling on back shortly after the hour when his sublime free-kick from 25 yards crashed back off Taylor’s post. Luke Ashworth saw a header tipped over seconds later as his side began to press.

There was still some fight in the visitors and Gilchrist stung the palms of Taylor from 18 yards with a driven first-time effort. Thomson was almost clean through with 15 minutes to go, but took his shot early and it was easy for Taylor.

FC United did have their goal with 10 minutes remaining to make it a nervy end for the home side. A long ball over the top found Harry Winter racing through on goal, and although it looked like the goalkeeper was favourite to the ball, confusion on the edge of the box allowed Winter to nip in and roll the ball into an empty goal.

Hardy was introduced from the bench and nearly made an immediate impact with a controlled strike from the left that was saved at the near post.

The visitors had the wind in their sails and Thomson’s fierce effort from 20 yards was deflected narrowly around the post by his own man.

However, seconds later the Coasters put the result beyond doubt. Hardy was slipped in and his cut back found the onrushing Matty Hughes who took a touch before rifling into the bottom corner for his first goal of the season.