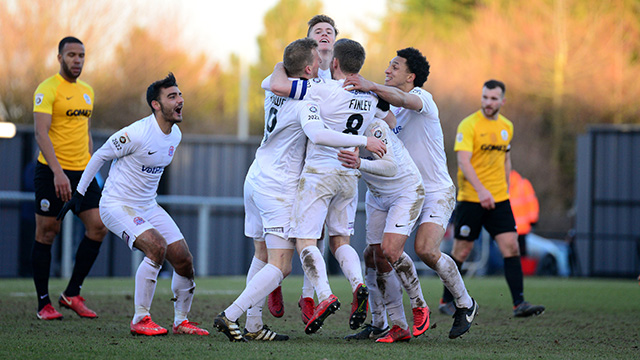 AFC Fylde leapfrogged visitors Dover Athletic and regained their place in the play-offs with a convincing 3-1 victory at Mill Farm.

The Coasters had lost their place in the top seven of the National League table after back-to-back defeats however goals from Danny Rowe, Serhat Tasdemir and James Hardy cancelled out Mitch Pinnock’s opener and ensured Chris Kinnear’s 1,500th game as a manager ended in disappointment.

Fylde boss Dave Challinor once again shuffled his pack, making four changes to the side that was beaten by Guiseley in midweek.

The visitors were enjoying some early pressure and a loose ball inside the box almost fell kindly to Pinnock, however Jay Lynch was quick off his line to claim at the winger’s feet.

Rowe hit back with a real chance for the Coasters when picked out by a perfectly weighted pass from Finley, however, like his opposite number, goalkeeper Mitch Walker made a fine point-black save.

A storming run from Jordan Tunnicliffe saw the Fylde centre-half evade three challenges before slipping in Jack Muldoon who couldn’t quite beat Walker to the ball inside the six yard box.

Taylor, still awaiting his first goal for the club, stung the palms of Walker with a vicious half-volley as the hosts’ momentum started to build.

Dover looked content to sit back after a bight start and Liam Bellamy was well over the bar with a rare opportunity.

The game was slowing down in blustery conditions at Mill Farm – Pinnock’s well-struck shot the highlight of a uneventful five minute spell midway through the half.

Some neat interplay around the edge of the area allowed Finley to clip a cute ball through to Jones and although the winger got a toe to the ball, his effort sailed over the top.

There was little in the game as the clock edged towards half-time although both sides had chances to nick the opener. Finley’s left-footed strike from the 18-yard line almost squirmed underneath Walker, whilst Bird dragged a strike just wide of the far post up at the other end.

Despite offering very little going forward since the restart, it was the visitors that took the lead. Full-back Josh Passley beat Zaine Francis-Angol down the left before delivering a delightful cross to the back post that was harder to miss for Pinnock.

The home side were knocking on the door on the hour mark with a succession of corners – Tunnicliffe’s glancing header the closest Fylde came to finding an elusive equaliser.

Grand thought he had it moments later when his strong header arrowed goalwards, only to smack Walker clean in the face on the line and deflect over the bar.

It was going to take a moment of magic for the Coasters to drag themselves back into the contest and Rowe didn’t disappoint. With just twenty minutes remaining the league’s top scorer sold his marker with a famous chop, nicked it past another challenge and placed a fine left-footed strike into the opposite corner from 18 yards.

The comeback was complete just eight minutes later. Young starlet Serhat Tasdemir, introduced just five minutes previously, took a couple of touches on the edge of the Dover penalty box before lashing a low shot past the helpless Walker.

Tunnicliffe could have sealed the points with five minutes remaining however his looping header from Finley’s corner was cleared off the line by Bird.

Fellow defender Francis-Angol was also aiming to put the icing on the cake when played clean through by Rowe, but his vicious effort was well parried around the post by Walker.

The result was finally put to bed in added time when the Coasters grabbed a third. Tasdemir was desperately unlucky to see his effort across goal come back of the post, but thankfully Hardy was on hand to slot home the rebound.