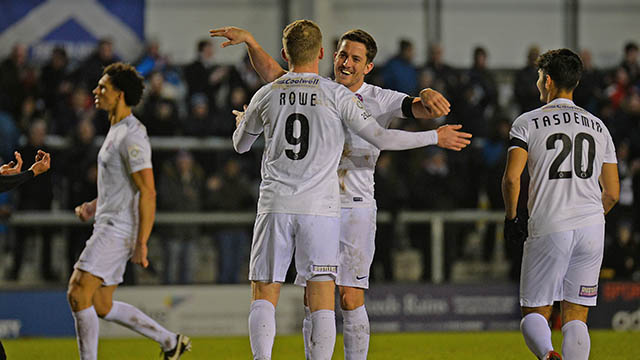 The Coasters are now sixth in the league standings after goals from Andy Bond, Danny Rowe and Jordan Tunnicliffe secured a stunning sixth win in seven.

Manager Dave Challinor named the same side that put six past league leaders Macclesfield Town just four days previously and it was his promotion hopefuls that first threatened when Zaine Francis-Angol crossed low for Danny Rowe – who was aiming to end his goal drought of one game – however he sidefooted a clever effort wide of the far post.

Much like against the table-toppers, Fylde raced into an early lead. Sam Finley looped a cross into the centre of the penalty area and there was Bond to steer a half-volley into the bottom corner for his second goal in as many games.

Fylde had the chance to break away after perseverance from Bond sent Finley scampering into the Maidstone half and although his ball into Rowe was well taken, the frontman couldn’t pick out a white shirt with his centre.

The hitman’s next touch was far superior. Smith found him on the 18-yard line and he took a touch before cushioning a strike towards the far corner however could only watch on as his effort came back of the upright.

The Coasters were really starting to up the ante as the half-hour mark approached and Maidstone stopper Lee Worgan had to react quickly to keep out Jack Muldoon’s back post header.

A tame Reece Prestedge free-kick that was easily claimed by Jay Lynch was the best that the lacklustre visitors could muster in a disappointing first half showing.

The Coasters were forced into an early change shortly before the interval when winger Jonny Smith, carrying a suspected knock, was replaced by Serhat Tasdemir.

A deserved second goal duly arrived for the Coasters on the stroke of half-time. Muldoon got down to the byline before cutting the ball back for Rowe who scuffed a strike against a defender, off the post and beyond a scrambling Worgan. Not his prettiest, but equally important!

Maidstone made their first real impact on the match a couple of minutes after the restart when a mix up between Jordan Tunnicliffe and Sam Stubbs saw Delano Sam-Yorke nip between the two centre-halves however, not for the first time this season, Lynch came to the rescue with a brilliant point-blank save. Darius Osei fired narrowly over in the melee that ensued.

A suspected half-time dressing down appeared to have worked a treat, with Sam-Yorke looking particularly roused. The frontman turned his man 20 yards from goal before fizzing an effort at Lynch that was well held by the Fylde custodian.

Despite controlling much of the possession, Fylde were struggling to find their fluency of the first half. Tasdemir was inches from meeting Rowe’s cross from the right, whilst the youngster himself then picked out Montrose racing menacingly toward the Maidstone area, however his attempted controlled strike cleared the crossbar.

The game should have been dead and buried with 15 minutes to play. Finley whipped in a cross from that right that was nodded back into the danger area by Tasdemir for the onrushing Muldoon who looked certain to ripple the net but instead sliced his effort a foot wide.

Maidstone replied with an attempt of their own almost instantly although Osei’s strike from distance was watched over the bar by Lynch.

Hot prospect Tasdemir could have sealed the three points himself in the final ten minutes when he broke down the left before cutting inside and hitting an awkward shot across goal that bobbled up in front of Worgan and drifted wide of the far post.

However, the result was finally put to bed as Tunnicliffe made it three. Finley delivered a corner in from the right that was begging to be hit and the Coasters centre-half duly obliged, volleying through a crowd of players past a blind sighted Worgan.