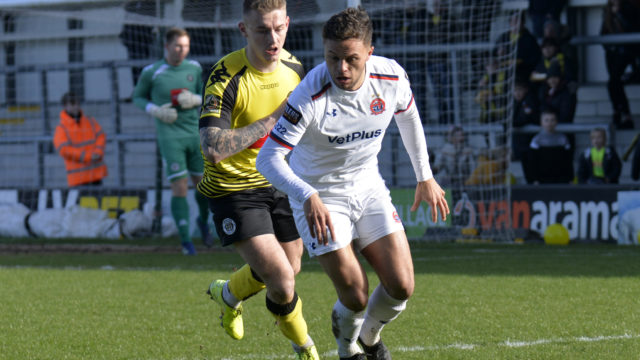 The Coasters bow out of the FA Trophy in the Quarter Final, after an extra time defeat.

Goals from Jordan Williams and a Luke Burke stunner were not enough, as second half strikes from Lloyd Kerry and Jack Muldoon took the tie to extra time, before Muldoon hit a wonder strike of his own, to get his second and Harrogate’s third.

With Storm Jorge arriving in the UK, the ground staff at Mill Farm worked exceptionally hard to get this afternoon’s FA Trophy match to go ahead.

The first half saw a wind affected game take shape. The visitors were kicking into the wind and it was creating them chances, but Jim Bentley’s backline were staying strong and standing up to the fight. Sam Hornby had to react well on a couple of occasions to keep Town from scoring, but overall it the Coasters looked comfortable.

A professional, but relatively uneventful first half ended goalless.

The second half saw an action packed 45 minutes. With just eight second-half minutes on the clock, Jordan Williams turned home a corner inside the six yard box to give Fylde the lead, which was nothing more than the early pressure had deserved.

10 minutes later, the lead could have and certainly should have been doubled. Mark Yeates played a lovely ball through to Kurt Willoughby, but the forward saw his first effort saved and the rebound hit the side netting.

The Coasters were then forced to pay for missed chances, with a quick fire double from the visitors. It was Kenny who struck to level after Muldoon’s pass, before the former Fylde man, Muldoon scrambled the ball into the net himself to make the score AFC Fylde 1-2 Harrogate Town.

With just seconds remaining for the Trophy holders to hit back, the Mill Farm faithful saw something special from Luke Burke. The right-back ventured forward and unleashed a thunderbolt into the top corner, sending the tie to extra time.

In the first period of extra-time it was to be our visitors that had the advantage of the wind for the first 15 minutes, and they took advantage of that. Muldoon – who had entered the game as a second half substitute and already got on the scoresheet – scored again, turning and unleashing a ‘worldie’ from all of 30 yards, that gave Hornby no chance.

Jim Bentley’s side could not be accused of giving up in the final 15 minutes of the match. They threw everything forward, but a sea of Harrogate bodies were looking to stop them. Multiple corners, crosses and other efforts on the Town goal were protected by a defence that sit at the top end of the National League. Despite their effort, the holders exited the FA Trophy at the Quarter Final stage.