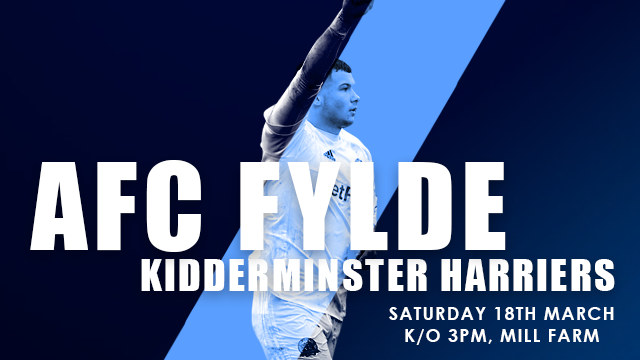 AFC Fylde claimed a priceless point against Kidderminster Harriers with a last-gasp goal in a bad tempered encounter at Mill Farm.

Harriers raced into a two-goal lead before the break but Dan Bradley gave the Coasters hope inside the final ten minutes before a crazy finale saw three red cards and a 97th minute leveller from substitute Matt Blinkhorn.

Manager Dave Challinor handed a debut to midfielder Josh Kay following his loan switch from Barnsley this week whilst starlet James Hardy recovered from injury to secure a place on the bench.

The Harriers created the first real opening in the driving rain at Mill Farm and captain Keith Lowe felt aggrieved that he didn’t get a corner when his header flew past the near post.

Rowe was looking dangerous from the off and after a moment of magic, the front man fizzed in a cross that was almost turned into his own net by Ryan Croasdale.

The visitors really should have broken the deadlock 15 minutes in when a ball over the top found Sam Austin in acres of space at the back post but his first time effort was deflected into the side netting by goalkeeper Rhys Taylor.

Taylor pulled off another sensational save soon after when James McQuilkin’s free-kick was nodded goalward by Josh Ezewele but the Fylde stopper showed off his reflexes to claw the ball out of the top corner.

A goal was seemingly coming and Kiddy deservedly opened the scoring on 25 minutes. Elton Ngwatala sold his man on the edge of the penalty area and whilst he saw his shot blocked, the ball fell kindly to Croasdale who swept home into the bottom corner from 15 yards.

The momentum was with the visitors and Sam Austin fired narrowly over when well placed as the Harriers continued to dominate.

A second goal duly arrived 10 minutes later when Taylor missed with a punch from McQuilkin’s cross and Keith Lowe had the simple task of blasting into the open goal.

The Coasters came out for the second half with a new lease of life and were on the front foot from the off as Daniels saw his back post header loop into the goalkeepers arms.

Fylde had their best chance of the match so far when Rowe squared to Bond on the edge of the box but the midfielder couldn’t generate enough power and his strike was comfortable for Sam Hornby.

The hosts were boosted by the welcome return of James Hardy shortly after the hour mark as he came on for his first appearance since January.

Despite plenty of endeavour, chances were still proving hard to come by. There was almost a moment of embarrassment for Caspar Hughes when his wayward pass back evaded Taylor and trickled agonisingly wide of the far post.

Dan Bradley looked to make a breakthrough at the other end after advancing well from the half way line however his eventual strike from distance skipped off the surface and into the goalkeeper’s arms.

The Coasters were certainly starting to knock on the door and Rowe wasn’t far over with a header from Tom Kennedy’s cross.

And all of a sudden it was game on as the Coasters halved the deficit eight minutes from time. Bradley’s perseverance down the left forced Lowe into a poor back pass and the midfield man latched onto the loose ball, beat his man in the area and fired into the top corner.

Kidderminster were reduced to ten with two minutes to play when Ashley Carter’s lunge on Sam Finley was deemed a sending off by referee Steven Copeland.

The referee had more difficult decisions to make when a mass brawl broke out moments later. After lengthy discussion with his assistants, both Sam Finley and Tyrell Waite were shown red cards in the ensuing melee.

However there was to one final twist in the match and it would send the Coasters fans into delirium. Kennedy whipped in a cross from left and Matt Blinkhorn, who had only entered the fray moments earlier, rose to nod a fabulous header out of the reach of Hornby into the far corner of the goal.