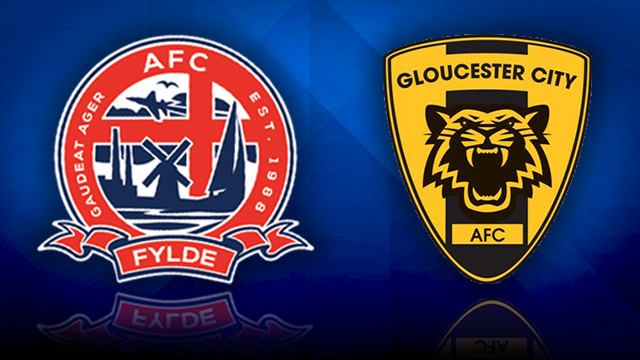 AFC Fylde stretched their unbeaten run in the National League North to eight games following a 2-2 draw with Gloucester City.

Goals from top scorers Danny Rowe and Steve Williams looked to have sealed victory for the Coasters, however a late equaliser from substitute Joe Parker snatched a point for the visitors.

Dave Challinor made just one change to the side that beat Bradford Park Avenue last time out with Sam Finley coming into the team and it was the midfielder that first threatened – his early sighter skipping off the surface into the goalkeeper’s arms.

The deadlock in the drizzling rain was broken and it was a familiar name on the scoresheet. Danny Rowe picked up on a loose back pass to keeper Jasbir Singh and chipped a delightful left footed strike over the stranded custodian.

Gloucester defender Keiran Thomas was perhaps lucky not to see red quarter of an hour in when he brought down Bohan Dixon and Rowe saw his curling effort from the resultant free-kick tipped around the post.

Fylde were piling the pressure on and Andy Bond hit the target with a low first time strike from 20 yards but the keeper got down well.

How the Coasters didn’t score during the minutes applause for Zoe Tynan was a mystery, a whipped free-kick from Tom Kennedy eluding everyone but the keeper managed to readjust to claw the ball off the line.

Gloucester should have levelled the scores on 25 minutes when Zack Kotwica was played clean through however Tony Thompson did well to smoother the chance with a big save. Finley had a similar chance at the other end seconds later but again the goalkeeper came out on top.

The rain was beginning to take its toll on the match as Rowe’s low cross stopped dead before it could reach the lurking Finley at the back post. Rowe himself headed just wide from a dangerous corner soon after.

Only the woodwork prevented a second Fylde goal when Finley hit a peach of a strike that was diverted onto the post by Singh after some lovely link up play between James Hardy and Rowe.

Fylde were once again denied by a goal-line clearance when Rowe attempted to poke home at the back post but some resolute defending from the visitors kept the hosts at bay.

Livewire Finley fashioned the first real chance after the break when he played a one-two with Rowe on the edge of the box but skewed his first time strike wide of the left post.

Joe Hanks rose well to meet a cross from the left but his header was straight at Thompson before the stopper reacted well cut out Hopper’s close range strike.

The visitors drew level against the run of play on 68 minutes. An in-swinging free-kick was flicked onto the post by Hopper and Craig Reid was lurking to tap home from close range.

The Coasters continue to push and had yet another chance cleared off the line as Hardy tried to poke home Bond’s left-footed strike.

Rowe was desperately unlucky to see a thunderous free-kick crash back off the crossbar in the final ten minutes and just as it looked like it wouldn’t be Fylde’s day, Williams controlled in the area from a corner and smashed the ball into the roof of the net.

However there was to be one final and cruel twist in the game. With just two minutes of normal time to play, Parker was played into the left of the box and he fired a low drilled shot across goal into the far corner to earn a share of the spoils.