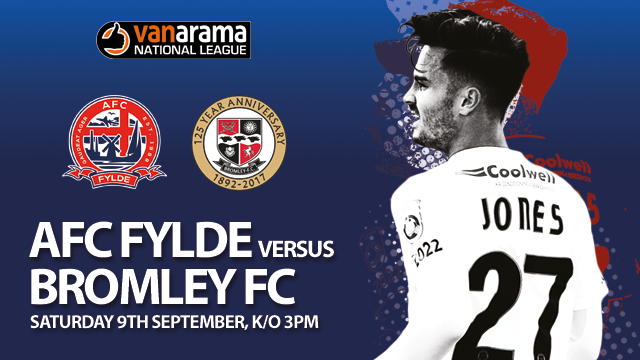 Two goals in as many minutes earned AFC Fylde a share of the spoils in an entertaining 2-2 draw against Bromley.

The visitors raced into an early lead through Frankie Sutherland and doubled their advantage shortly after the break when Josh Rees poked home.

However, quick-fire goals from 17-year-old Serhat Tasdemir and top scorer Danny Rowe sealed a point for the hosts.

Coasters boss Dave Challinor made two changes to the side that was beaten by FC Halifax Town last time out with Zaine Francis-Angol returning in place of Josh Ezewele and Henry Jones replacing James Hardy.

The visitors almost took an early lead inside the opening two minutes when frontman Brett Williams was sent racing clear however Rhys Taylor got down well to turn his low strike around the post.

Bromley went closer still a minute later when Luke Wanadio took aim from 25 yards and was unlucky to see his powerful effort cannon back off the crossbar.

A goal looked to be coming and duly arrived in the eighth minute when Bromley deservedly took the lead. A dangerous counter attack saw Wanadio break away down the right and deliver a low ball into the area that Sutherland tucked away at the near post.

Bromley had the ball in the back of the net for a second time when Williams diverted the lively Wanadio’s goalbound strike past Taylor, however the linesman’s flag came to the rescue for Fylde.

Fylde were whipping balls into the box but, aside from a pinball moment that eventually fell kindly to goalkeeper David Gregory, were enjoying little luck in the final third. Full-back Luke Burke flashed one wide on the 20-minute mark as the Coasters started to raise their game.

Record goalscorer Rowe, who had scored twice in the Coasters’ previous two outings, had his first real opportunity of the afternoon midway through the half when he headed straight into the hands of Gregory.

A big clearance from Sam Finley gave Jack Muldoon a chance to stretch his legs and although he picked out Jones in the middle, the Welshman’s shot on the turn was blocked.

The tide was turning with ten minutes of the half to play and the unlikely figure of Zaine Francis-Angol almost levelled up proceedings in even more unlikely circumstances when his cross from the left glanced off the underside of the bar.

The visitors took just five second-half minutes to extend their lead. Rowe’s challenge handed Bromley a corner from the left that was whipped in and flicked home far too easily by midfielder Josh Rees.

The goal forced Challinor into two quick changes as Andy Bond and Jack Muldoon made way for youngsters Jonny Smith and Serhat Tasdemir.

Fylde were a whisker away from pulling one back on the hour when Burke floated a ball over the top to Rowe and the frontman improvised to lift a clever header over the Gregory, however the stopper scrambled back to claw the ball off the line.

The visitors were almost gifted a third goal when Finley had his pocket picked allowing Wanadio to race clear and after skipping past three attempted challenges, his cross found Rees who headed just wide.

However, a crazy two minutes turned the game on its head. A quick break saw Jones get a strike away that deflected into the path of Tasdemir who took a touch before drilling an exquisite low drive into the far corner of the goal.

And just moments later the Coasters were level. Smith played the ball into Rowe on the edge of the area and the frontman turned his man before slamming a left-footed strike across goal into the far corner.

Jones almost completed a sensational comeback with just 15 minutes remaining when he lashed a vicious strike narrowly over the bar from the edge of the area.

Midfielder Lewis Montrose could have nicked it for the hosts in added time when he latched on to Rowe’s knockdown however his low strike was a foot wide of the left-hand post.