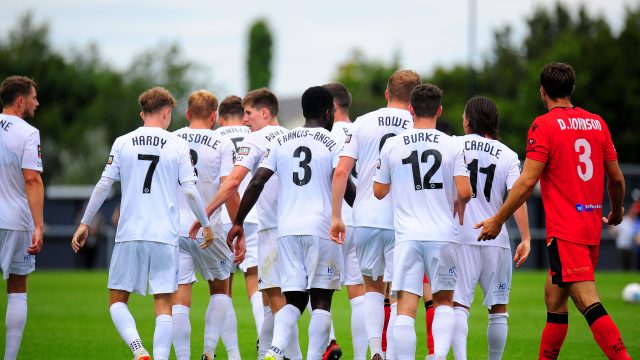 A stunning 30-yard effort from Danny Rowe ensured the Coasters started their 2018-19 campaign with three points against a tough Bromley side.

New boy Danny Philliskirk linked up well with James Hardy throughout the first half and it was Hardy who had the first chance of the game skewing the ball narrowly wide from
a Philliskirk cross. Bromley arguably had the better of the opening 25 minutes with Omar Bugiel and Marc-Anthony Okoye testing Jay Lynch in the Coasters goal.

The Coasters looked a little nervous at times as the visitors frustrated them with an organised defensive display but as the half wore on they would take the ascendency.
A lofted cross from Joe Cardle was headed back into the box by Philliskirk into the path of Danny Rowe who saw his half-volley tipped over the bar by David Gregory.

Cardle would have some joy down the left side and he was to create the next chance of the game cutting in and curling a shot just over the bar from the edge of the box. The
Coasters took the lead on the brink of half-time as a low cross from the right from Cardle wasn’t cleared by the Bromley defence and Andy Bond was on hand to tap home from
close range into an empty net.

The Coasters started the second half strongly and good play from Cardle and Bond forced a succession of corners which the visitors did well to deal with. Just after the hour
mark Bromley were level as Jordan Higgs played the ball through the legs of Neill Byrne and slid the ball under Jay Lynch and into the back of the net from an acute angle.

This sparked the Coasters back into life and within four minutes they were back in front in spectacular fashion. Danny Rowe picked up the ball on the right wing before cutting
in and unleashing an absolute rocket into the top left corner from nearly 30 yards. It could have been three soon after as James Hardy ran at the Bromley back line and fired a
low effort just wide of the left post.

With ten minutes to go Challinor brought on young winger Serhat Tasdemir and gave a debut to new signing Gime Toure, both of whom caused
the Bromley defence problems in the last few minutes of the game. The visitors tried their best to force an equaliser but were unable to break the Coasters down for a second time
and Fylde held on for all three points to start the season in a positive fashion. The Coasters lie 5th in the table ahead of Tuesday’s night trip to Wrexham AFC.