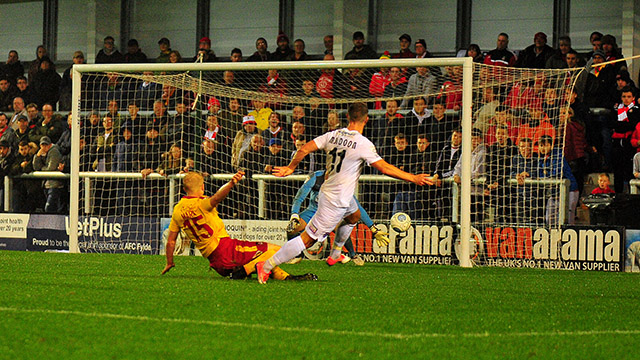 Former Wrexham youngster Jonny Smith came back to haunt his old side in a convincing 2-0 National League victory at Mill Farm.

The wing wizard put the Coasters in control after just eight minutes before Jack Muldoon sealed the points late on with a fine solo goal as the Coasters secured their second victory over high-flying Wrexham in the space of ten days.

Smith was the only change from the side that line-up against Maidstone at the weekend, replacing Simon Grand on Dave Challinor’s team sheet.

The Coasters flew of out the blocks and hit their opponents with two quick-fire chances in the drizzle at Mill Farm. Firstly Andy Bond rolled a tame strike at Chris Dunn from a decent position, before George Edmundson stormed up the field and dragged one wide from 25 yards.

Fylde soon made their early pressure count and broke the deadlock inside ten minutes. Rowe rifled a trademark free kick at goal that proved too hot to handle for Dunn who palmed the ball straight into the path of Smith for a simple tap in.

Loanee Smith almost found an immediate second when he skipped past several markers across the Wrexham box but was eventually forced too wide and his strike was easily blocked by the stopper.

Dunn was certainly the busier of the two goalkeepers and did well to get a fist to Finley’s fierce cross from the left that was heading towards the far top corner.

Fylde almost repeated their trick on the half-hour when Rowe struck another thunderbolt from fully 35 yards that was diverted into the path of Muldoon but superbly kept out by Dunn.

It took until the 42nd minute for the visitors to pose their first real threat when Alex Reid found space on the edge of the Fylde area before testing Jay Lynch with a low drive towards the bottom corner.

The match started to even itself out after the break and the visitors were first to ask questions when a long ball into the box was flicked goalwards by Manny Smith and into the hands of Lynch.

Bond hit back with a chance for the Coasters when he let fly from distance with a piledriver that took a deflection, making it an awkward save for Dunn.

The hosts were getting closer as Rowe’s clever run saw him get a header off from Finley’s corner and Jason Taylor almost turn the ball home only to be denied at point-blank range by the goalkeeper.

Smith was causing his former employers endless problems and almost doubled his tally when picked out by Bond in the centre, however his improvised finish flashed narrowly wide of the post.

Rowe attempted to bring liven up proceedings after a lull in play when he turned his man on the edge of the area before striking a thunderous left-footed drive that was turned around the post.

Muldoon produced a moment of magic himself moments later when he danced past three challenges before forcing Dunn into a fingertip stop.

However, the forward wasn’t to be denied for long. Bond’s incisive throughball sent Muldoon racing in on goal and the frontman made no mistake with a sublime finish inside the near post.

The visitors had the ball in the back of the net with eight minutes to play when Massanka turned home at the near post however, much to the home crowd’s delight, the linesman’s flag was raised.

Late substitute Serhat Tasdemir should have put the icing on the cake in the final moments when a quick counter attack found the youngster in space just inside the area however his first-time strike was marginally wide of the far post.