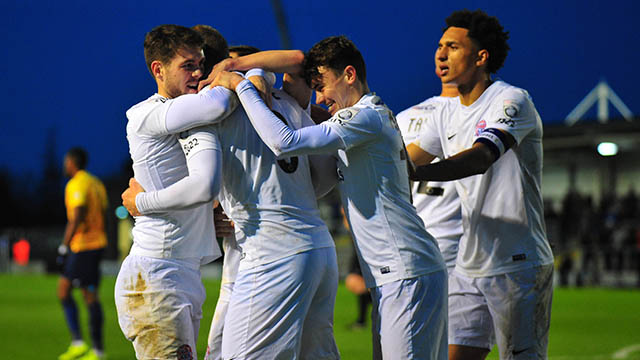 The Coasters hitman moved into double figures with a goal in each half to condemn the Gulls to a third straight league defeat as Fylde moved up a place in the table.

Jonny Smith was in electric form from the off and went close to providing the opener when he cut inside his man and burst past the next before seeing his cross from the byline blocked by goalkeeper Vincent Dorel.

Top scorer Danny Rowe nodded an effort straight at Dorel as the host’s started to pile on the pressure.

Jamie Reid had a glorious chance at the other end to take a surprise lead when he tricked his way past Jordan Tunnicliffe however his tame left-footed strike was comfortable for Jay Lynch.

Fellow frontman Jennison Myre-Williams found himself in a near identical position moments later but instead of blasting his effort near post with the goal gaping, he dragged his low effort wide of the far upright.

After a bright start, the match became a rather uneventful spectacle before a piece of magic from Rowe lit up a bitterly cold Mill Farm. The frontman beat his man down the left before cutting inside and drilling a fierce strike at goal that was turned around the post by Dorel.

Rowe wasn’t to be denied for much longer and put the Coasters ahead from the resultant corner shortly after the half-hour. Henry Jones’ corner was played back to the edge of the area where Rowe was lurking and the frontman made no mistake with a low strike across goal that nestled into the bottom corner.

Torquay’s threat had gone quiet but they came to life a minute before the break when defender Sean McGinty swung a leg at a teasing cross from the right, however Lynch got himself in the way to maintain the Coasters lead.

Lewis Montrose was first to try his luck after the interval – the crowd urging the stand-in captain to shoot from distance and he duly obliged with a fizzing effort that flashed narrowly wide.

The visitors almost capitalised on some slack play from Mangan when left-back Liam Davis picked his pocket and broke clear only to scuff his low strike well wide of the far post.

The Fylde debutant nearly atoned for his earlier mistake with vicious strike inside the area that had the crowd on their feet, however it whistled just over from 15 yards.

The Coasters doubled their advantage moments later and there was no surprise with the name on the scoresheet. After Zaine Francis-Angol’s cross had been half-cleared, Luke Burke whipped the ball in from the right and Rowe nicked in front of his marker to head into the bottom corner.

The second goal seemed to sap all the life from the visitors and a low effort from McGinty that was palmed to safety by Lynch was their solitary chance in the final 15 minutes.

Fylde saw out the final moments with minimal fuss to make it six wins from the last seven games in all competitions.