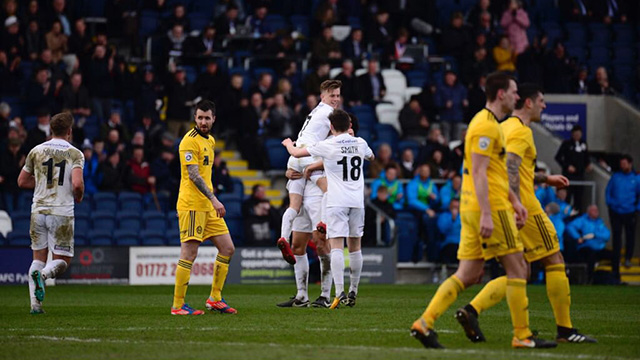 AFC Fylde moved within two points of the National League Play-Off places with a comfortable 2-0 victory over FC Halifax Town.

Halifax kept their free-scoing hosts at bay in a tight opening half, however two quick fires goals shortly after the break from Jonny Smith and James Hardy sealed the points.

Fylde boss Challinor made just one change to the side that was beaten by Dagenham & Redbridge last time out, with Zaine Francis-Angol stepping in for Jordan Flores.

The Coasters went close to making an early breakthrough inside the first minute when Jack Muldoon broke away and squared to Hardy, who sliced his left footed effort wide.

They Shaymen hit back with a glorious chance of their own moments later. Francis-Angol was dispossessed on the halfway line, allowing Connor Thomson to bear down on goal however after cutting inside he lashed a vicious strike just wide of the near post.

The chances were coming thick and fast and the hosts should have been ahead on five minutes when a loose ball fell kindly to Muldoon eight yards out, although he could only watch on in despair as his first time effort clipped the post.

The visitors were forced into an early change when danger man Matty Kosylo limped off to be replaced by Jake Hibbs.

National League top scorer Danny Rowe had his first sight of goal on the quarter-hour, his trademark chop fooling yet another helpless defender, although his wicked strike from 20 yards was wide of the mark.

The lively Muldoon had another shooting opportunity from a similar position when expertly picked out by Hardy but this time his strike was deflected around the same post.

Rowe looked certain to add to his 22 league goals shortly before the half-hour mark when he cut inside his man from the right however Matty Brown made a fantastic saving challenge with the frontman set to pull the trigger.

Hardy was another looking dangerous for the Coasters and slapped a shot from distance towards the Halifax goal that was well claimed by the stretching Sam Johnson.

Right-back Luke Burke was close to sending the home side into the break the happier, however his curling strike from 18 yards was a whisker wide of the far post.

Smith went equally close with the final kick of the half when he waited and waited in the box before spinning and firing narrowly over from ten yards.

Fylde made a dream start to the second period, taking the lead two minutes in when Smith’s cross from the left sneaked straight into the far corner of the Halifax goal.

The hosts took just seven minutes to double their lead. Hardy opted out of hitting a loose ball first time, instead taking a touch before drilling a precise effort past goalkeeper Sam Johnson into the far corner.

Left-back Francis-Angol, fresh from international duty with Antigua, went close to adding a third when Rowe whipped a ball out wide, however his looping effort dropped narrowly wide of the far post.

The killer goal should have arrived 20 minutes from time when first Muldoon somehow headed against the bar from four yards before Jordan Tunnicliffe saw his shot on the rebound deflected wide from a similar distance.

Lewis Montrose headed one goalwards that was comfortable for Johnson as the Coasters kept up pressure but third goal proved elusive as Muldoon powered Smith’s cut back into the grateful clutches of Johnson late on.