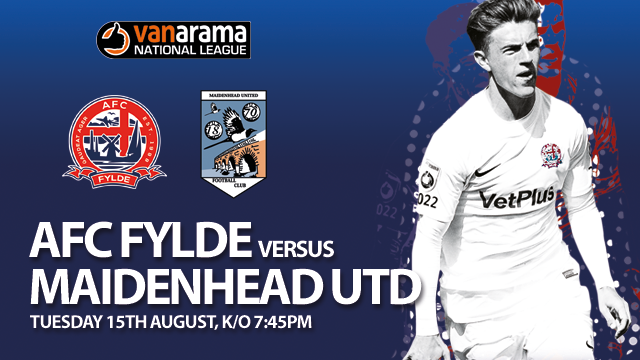 Ten man AFC Fylde suffered their first defeat of the season at the hands of a Dave Tarpey-inspired Maidenhead United.

The United centre-forward netted an incredible four goals, including two penalties, after Fylde were forced to play a man light for the majority of the game following Josh Langley’s dismissal.

Lewis Montrose had given the Coasters hope of the stroke of half-time after Tarpey’s first half penalties, however the night would belong to the National League South record goalscorer who went on to add a fine individual strike and a stunning set-piece to claim the points.

Fresh from a thrilling 3-3 draw with Ebbsfleet United at the weekend, manager Dave Challinor named an unchanged starting XI for the third match running.

The Coasters hit their opposition with a glorious early chance when Jack Muldoon fizzed a teasing ball into the box that was dummied by Danny Rowe before being swept narrowly wide of the far post by Sam Finley.

Despite the early promise of an open encounter, the first ten minutes developed into a scrappy affair with neither side able to get a foot on the ball.

That should have changed as the visitors were almost gifted a goal when Finley’s mistake on the edge of his own area presented hitman Tarpey with a chance one-on-one with Rhys Taylor, however the Fylde stopper made a crucial block.

Andy Bond fired warning shot at the other end that in the end was comfortable for Carl Pentney in the Magpies goal.

The match exploded to life in the 21st minute when the visitors were awarded a penalty. Langley got caught in a foot race with Tarpey and came out second best, hauling down his man in the area, leaving the referee with no option but to point to the spot. And to add insult to injury, Langley was was shown the red card whilst down receiving treatment.

After an extended stoppage, Tarpey brushed himself down and dispatched the resultant spot-kick into the bottom right-hand corner of Taylor’s goal.

Tarpey had the taste and with the Fylde backline a man short, danced past a challenge before slamming a left-footed strike at Taylor that was well palmed away.

The Mill Farm crowd was sent into shock as referee Paul Marsden pointed to the spot for the second time in less than 20 minutes following a goalmouth scramble. Montrose was adjudged to have handled on the line and once again Tarpey stepped up to double Maidenhead’s lead with an emphatic finish down the middle of the goal.

However, with five minutes up on the board for added time, the Coasters pulled a goal back out of the blue. Henry Jones whipped an inviting ball to the back post and Montrose snook in to poke the ball across goal and into the far corner.

Challinor made a double switch at the break with Josh Ezewele and Simon Grand replacing Rowe and Henry Jones.

The hosts almost made the perfect start to the second period when Finley thought he had nodded in the equaliser. Jonny Smith crashed a fantastic drive against the post that was followed up by Zaine Francis-Angol who launched his effort against the bar before Finley nodded home from a yard only to see the linesman’s flag raised.

Montrose slammed one just wide moments later as the Coasters pushed for the leveller.

No sooner had Fylde thought they were back in the game, the impressive Tarpey struck again. The dangerous frontman nicked the ball past Tunnicliffe on the edge of the area, left Taylor for dead and slotted into an open goal.

There was still life in the Coasters as they broke away with 25 minutes to go through Francis-Angol who picked out Jack Muldoon in the area, however the forward’s strike was tame and easy for Pentney.

The visitors should have put the result to bed when Harry Pritchard put the ball on a plate for Jake Hyde on the six-yard line, but the forward smashed his attempt against the bar.

Seconds later, with the woodwork still shaking, Fylde did the same at the other end. Half-time substitute Hardy cleverly nipped into the box and was dismayed to see his shot come back off the near post.

The result was confirmed when man of the match Tarpey, not happy with a mere hat-trick, curled a sublime free-kick into the top corner

Francis-Angol had another wonderful chance to net a consolation goal late on when picked out by Muldoon but, as his header came back off the far post, you just knew it wasn’t to be Fylde’s day.