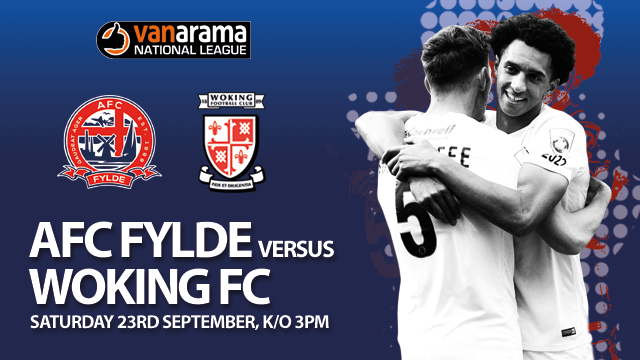 AFC Fylde surrendered a half-time lead as they went down 2-1 against in-form Woking FC at Mill Farm.

The hosts looked in complete control following Jordan Tunnicliffe’s opener, however two-goals in under a minute shortly after the break ensured the visitors took all three points back to Surrey.

Fylde manager Dave Challinor handed a first league start to 17-year-old star Serhat Tasdemir with Jonny Smith dropping to the bench whilst Jay Lynch was once again preferred to Rhys Taylor in goal.

The Coasters started brightly with Henry Jones causing problems around the Woking penalty area and he would have been picked out by Danny Rowe inside two minutes if it wasn’t for a last ditch interception.

Both sides lacked a cutting edge in the early stages however the deadlock was broken shortly before the 20-minute mark as the hosts took control. Jones floated a corner to the back post and the unmarked Tunnicliffe chested the ball over the line for his second goal in as many games.

Jones launched a sighter soon after that flew narrowly over the bar whilst Rowe was next to fizz a strike at the Woking goal, however Nathan Baxter was equal to the frontman’s powerful effort.

How the home side didn’t double their advantage on the half-hour was a mystery. Another Jones corner dropped to Simon Grand at the back-post, then Rowe, followed by Lewis Montrose before the ball was finally cleared with almost every Woking player guarding the goal line.

Fylde were well on top but could not capitalise on a flurry of first-half corner, Tunnicliffe again going close with a glancing header.

Jones fooled everyone with a vicious free-kick that evaded the cluster of bodies in the area and forced a fingertip save from Baxter.

Whilst enjoying a decent amount of the ball, Woking were offering very little going forward – Nathan Ralph’s teasing cross into the Fylde box mounting some early second-half pressure that was eased with a comfortable clearance.

The Coasters dominance continued as the second half progressed and Tasdemir headed Jack Muldoon’s cross into the goalkeepers grateful hands.

However, completely against the run of play, Woking restored parity with their first real opportunity of the afternoon. With a corner only half cleared, Joe Ward crashed a stinging volley at the Fylde goal that took a wicked deflection before nicking in off the post.

And within 60 seconds the comeback was complete. Ralph whipped in a cross from the left and Philpot took advantage of the space afforded to head home unchallenged from eight yards.

With the home fans shellshocked, Jones whistled one over the top as the Coasters looked for a way back into the contest.

Woking substitutes Inih Effiong and Jason Banton combined with 20 minutes to play, however the latter slipped as he took aim from the edge of the area and his strike was tame.

Effiong found himself clean through and one-on-one with Lynch, but made the goalkeeper’s life a whole lot easier by tripping over his own feet as he went to shoot.

Coasters sub Jonny Smith almost caught Baxter out with a set-piece that was arrowing toward the top corner, however the Woking stopper pulled of a top save to maintain the lead.

There was still life in the Fylde attack and centre-half Simon Grand was inches wide with a glancing header from Jones’ corner as the full-time whistle approached.