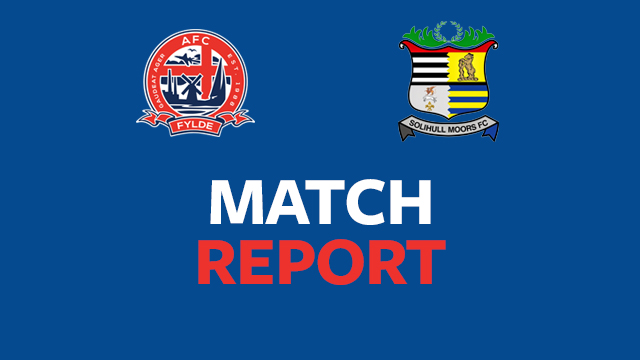 Solihull Moors leapfrogged AFC Fylde in the National League North table after a 2-1 victory in torrential rain at Kellamergh Park.

Darryl Knight put Solihull back into the lead early in the second half and the Coasters wasted the perfect opportunity to level the scores when Danny Rowe saw a spot-kick of his own saved by Ben Seagrist.

Dave Challinor made several changes to the side that drew 4-4 with Skelmersdale United in midweek with Dom Collins, Stephen Crainey and Alex Marrow all coming into the team.

The visitors fashioned the first opportunity of the match when a long ball was sent into the Fylde area, but Ben Hinchliffe pulled off a sensational reaction save to keep out the header at point-blank range.

Hinchliffe was a busy man in the opening exchanges and was on hand to keep out former Aston Villa striker Moore and Andy Brown who had both found space.

A goal looked to be coming and it duly arrived for the visitors on 14 minutes. Josh Langley was adjudged to have fouled Moore in the penalty area and he picked himself up and dispatched the resultant spot-kick.

The Coasters were struggling to get a foothold in the game and despite a succession of corner-kicks, they couldn’t find a way through.

Ryan Beswick came close to doubling Solihull’s advantage on 18 minutes when the ball fell kindly for him on the edge of the box, but his vicious left-footed strike was narrowly wide of the right post.

Fylde hit back with a glorious chance of their own two minutes later when Charles raced clear, but his strike across goal struck the post and Rowe’s follow up was comfortable for the goalkeeper.

The hosts were beginning to grow into the game and Sam Finley went close on 25 minutes with a powerful long-range drive that was kept out at the second attempt by Siegrist.

A deserved equaliser arrived on 35 minutes after a goalmouth scramble from an in-swinging corner, Charles getting the final touch as the ball nestled into the back of the net.

The rain continued to pour after the break and the conditions were not conducive to a free-flowing match, however the two sides were trying their best to play some decent football.

Solihull regained their lead five minutes into the second-half in calamitous circumstances. Hinchliffe dived on a loose ball and pushed the ball back into play whilst sliding out himself. The lurking Knights was only too grateful to pinch the ball and slot into an empty goal against the run of play.

The weather was starting to play a real part as the game reached the hour-mark, with the ball holding up almost all over the pitch.

Neither side looked like creating any type of opening and then all of a sudden the game sprang to life. Danny Lloyd raced down the left and was pushed as he broke into the box giving the referee no choice but to point to the spot. However, the chance was spurned as Rowe smashed the penalty straight at Siegrist.

The visitors looked to go further ahead when Moore latched on to Dom Collins’ under hit back-pass, however his effort from close range was blocked.

Charles came close for the Coasters in added time when he turned his man before unleashing a strike that flew inches wide of the post.

Right at the death, Lloyd was again felled in the opposition area, but the referee was unmoved despite the Coasters’ protests.