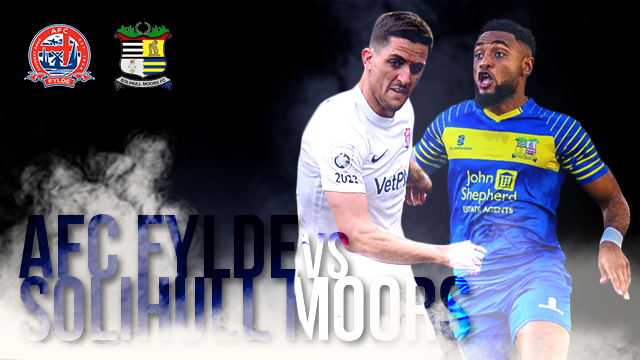 AFC Fylde play-off bid will go down to the last day after a 1-1 draw against Solihull Moors.

The Coasters cancelled out Omari Sterling’s opener when Andy Bond headed home but could not find a winning goal and may now need a result at Wrexham to guarantee a place in the end of season lottery.

Manager Dave Challinor made two changes from the side that suffered a first defeat in five at Maidstone with Jake Lawlor in for Simon Grand and Henry Jones replacing James Hardy.

Despite a positive start in the glorious sunshine at Mill Farm, the Coasters mood was soon dampened when Solihull took an early lead.

A quick free-kick found Sterling completely unmarked on the edge of the area allowing the frontman to let the ball run before lashing a strike inside the near post.

The Moors forward was looking dangerous early on and wasn’t far away from finding the top corner with a vicious curling effort from 15 yards.

Solihull continued to impress and Fylde stopper had to be on his toes to palm away a long range strike from George Carline.

The Coasters keeper pulled off an even better save moments later to keep out Darren Carter’s powerful free-kick that had made its way through the wall.

Midfielder Henry Jones, back in the team after an absence, hit a speculative effort over the bar as the hosts began to impose.

Lynch was performing heroics between the sticks, with a double save once again keeping the visitors at bay. Jermaine Hylton was sent clean through only to be thwarted by the legs of Lynch, who was quick off his line, before he diverted Sterling’s side foot on the rebound to safety.

Challinor swapped it around at the break, bringing Hardy on in place of Jones in an attempt to get the ball down after 45 minutes of head tennis between the two sides.

The switch made an immediate impact, with the Coasters stamping their authority and grabbing an equaliser. Jonny Smith whipped in a delightful cross from the left and Bond was on hand to nod the ball into the roof of the net.

The hosts almost completed a quick-fire comeback seconds later when Hardy slipped the ball through to Bond who saw his first-time strike palmed away by Max O’Leary, whilst Rowe’s follow-up was blocked on the line by the Solihull stopper.

We finally had a game and Moors striker Hylton would have restored their lead after cutting inside Jordan Tunnicliffe had it not been for a fantastic saving challenge from Lawlor.

Fylde were well on top as the half progressed and only a desperate block on the line prevented Smith from putting Fylde ahead when he found himself in acres of space in the Moors’ box.

Rowe had a strike from 20 yards palmed around the post as the home pressure really started to build.

The 29-year-old hitman went closer still with 15 minutes to play when he cut onto his left inside the area before seeing a wicked shot thumped off the line by the boot of Liam Daly.

Both sides wanted that all important winner and both Daly and Fylde sub Simon Grand headed wide at opposite ends with time running out.

Smith could have won it at the death when he raced down the right, nipped between two challenges and smashed a shot straight down the throat of O’Leary.