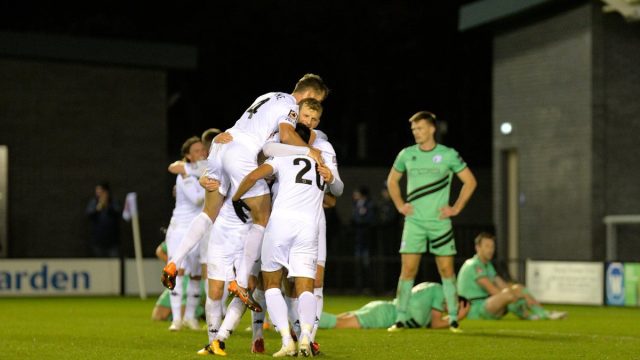 AFC Fylde moved up to 5th Place,  just three points off the summit of the National League after a last gasp Danny Rowe goal earned the Coasters a 1-0 win over Play-off contenders Gateshead at Mill Farm.

Chances were at a premium as the two sides seemed to cancel each other out before Rowe’s late finish.

Dave Challinor made one change to the side that had put six past Maidenhead United on Saturday with Nick Haughton making his first start for the club in place of Joe Cardle.

The Coasters started brightly and created the first chance through Haughton. The tricky midfielder saw his powerful 20-yard strike saved by Pears before Rowe fired the follow up over the bar.

Ten minutes in and they went one closer. Good work from Francis-Angol down the left saw him cross for Andy Bond but his effort bobbled over the keeper and was cleared off the line by Fraser Kerr.

Gateshead came into the game and started to create chances of their own. Steven Rigg headed just wide from a terrific cross by Tinkler and winger Greg Olley saw his 20-yard effort curl just wide of the top right corner.

Five minutes before half time the visitors hit the woodwork. A cross from Tinkler was again met by Rigg but his effort cannoned off the bar to the relief of the vast majority of those in Mill Farm.

The chances were few and far between after the break. Haughton had another long-range effort fly just over the bar whilst Gateshead’s Jack Hunter was superbly denied from close range by Lynch after a cross from the right had come back off the post.

Joe Cardle came on for Gime Toure on the hour mark before Serhat Tasdemir replaced Arlen Birch with twenty minutes to go. The youngster again made an impact having a powerful effort saved at the near right post side by Pears before a curling effort from the edge of the box went just wide.

The Coasters looked to be heading for a seventh goalless draw of the season but secured all three points with a goal in the final minute. Danny Philliskirk found Zaine Francis-Angol in space down the left-hand side of the area and the full back’s low cross was met by Danny Rowe who poked the ball past Pears from 8 yards to the delight of the home fans.

The Coasters move up to fifth place in the National League table just three points behind leaders Salford City. Their next game is a mouth-watering home clash with Leyton Orient at Mill Farm on Saturday.