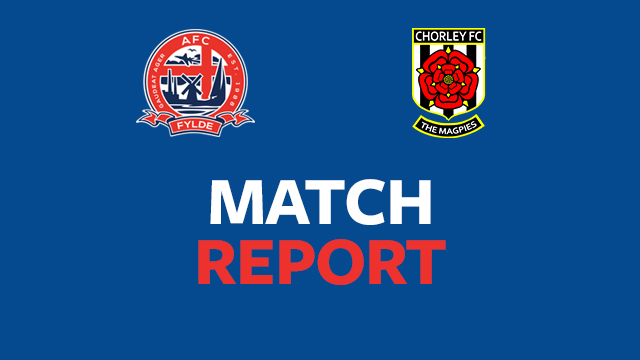 Former Fylde frontman James Dean missed a first-half penalty for the visitors before Rowe’s thunderbolt decided a thrilling match at Kellamergh Park to keep the pressure on at the top of the table.

Dave Challinor’s were boosted by the return to fitness of captain Tom Hannigan and midfielder Richie Baker ahead of the match, whilst Danny Lloyd was also included in the starting line-up after recovering from illness.

Chorley’s Jack Lynch had the first opportunity of the afternoon, but his left footed drive was wide of the right hand post on three minutes.

The returning Hannigan fashioned the first chance for the Coasters shortly after when he headed over from Lloyd’s deep corner kick.

Fylde were enjoying the better of the opening exchanges and Lloyd was looking dangerous as he almost got on the end of Danny Rowe’s fierce cross.

Challinor’s side were playing some delightful football and a particularly impressive piece of play almost allowed Dion Charles in to score.

The ball was straight up the other end on 19 minutes, but James Dean couldn’t direct his header on target when well placed in the six yard box.

The game sprang to life in the 23rd minute when the visitors were awarded a dubious penalty for a foul by Caspar Hughes. However, striker Dean stepped up and blasted the spot-kick over the bar, much to the delight of the home support.

The opening goal almost arrived two minutes later when Rowe danced past several challenges before squaring for Baker to fire narrowly over the bar.

Just seconds later and Rowe was in the thick of the action once more when he played in Lloyd, but his shot flashed across the face of goal.

The game settled down after the half-hour mark with neither side creating many chances until Sam Finley landed a freekick on to Sam Ashton’s goal on 38 minutes.

Finley tested Ashton a moment later when he curled an effort from 20 yards that was comfortably palmed away by the Chorley stopper.

The chances started to come thick and fast for the hosts as the game approached the break, Wilson next to try his luck when he headed into the keeper’s hands from Lloyd’s cross.

The next chance was perhaps the pick of the bunch, but Rowe’s header crashed back of the Chorley crossbar and away to safety.

Rowe was causing all sorts of problems for the visiting backline, twisting and turning before delivering a dangerous ball across goal that Charles couldn’t quite reach in the last action of the half.

The hosts picked up where they left off after the break and Baker was first to have an attempt on goal when his dipping volley was well wide of the left hand post.

Chorley first opportunity of the second period fell to Dale Whitham, but his long range drive was high and wide of Ben Hinchliffe’s goal.

A flurry of chances came Fylde’s way shortly before the hour-mark when Baker’s strike was deflected over the bar before Charles hit a similar effort well over from the resulting corner.

The visitors were starting to grow into the match and they spurned a glorious chance on 66 minutes when Darren Stephenson drove a powerful effort across goal from the left hand side, but no one could turn the ball home.

Matt Jansen’s side went closer still two minutes later when Andy Bond sent a dangerous cross into the area that eluded everyone and struck the top of the crossbar.

Fylde hit back with an opening of their own and the outcome was the same – Rowe slamming his shot against the base of the left hand post.

The netting was rippled with 15 minutes to play, however Lloyd’s stinging left footed piledriver was the wrong side of the Chorley post.

The deadlock was finally broken with just six minutes left on the clock and it was third time lucky for Danny Rowe. Receiving the ball from a throw in, the striker turned a smashed a strike from the edge of the box that was just too hot for Ashton to handle.

Lloyd should have perhaps put the result to bed when he latched on to Finley’s lofted pass, but he was thwarted by the feat of Ashton.

The was to be one last chance for Chorley when substitute Paul Correia headed on to the bar in the final seconds, but the referee’s whistle ended matters in Fylde’s favour.