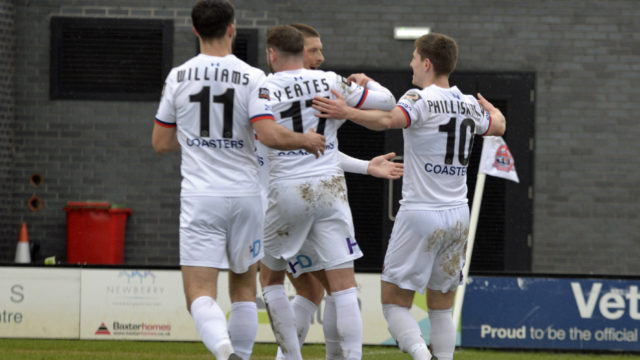 Danny Philliskirk’s first-half goal made all the difference this afternoon as the Coasters made it seven points from three games, with a 1-0 victory over Aldershot Town at Mill Farm.

The midfield man steered home the rebound from close range 20 minutes into the match after his initial penalty was saved by Mitch Walker, following a foul on Mark Yeates.

The Coasters dominated the majority of the encounter, mustering 15 attempts at goal and producing a commendable mix of stylish play and graft.

An early chance provided home fans with early encouragement, as Tuesday’s goal hero Alex Whitmore sent Jamie Proctor through against Walker, who smothered the striker and made a smart stop from his side-footed effort.

Jordan Williams was next to try his luck, with Walker again denying him before a crucial Aldershot clearance, and Yeates curled a promising hit just wide from outside the area. Whitmore saved the Coasters at the other end shortly after, as Kodi Lyons-Foster’s effort in the box looked destined to put the visitors ahead, with a vital block on the goal-line.

This would prove doubly crucial just two minutes later, as Fylde pressed once more and Proctor knocked a neat ball through to Yeates. The Shots’ Jacob Berkeley-Agyepong was unable to move goal-side of the Coasters man, subsequently bringing him down. Philliskirk stepped up and hit a side-footed shot which Walker parried out, only to be beaten at the second attempt.

Aldershot committed numerous men forward as they looked to restore a level scoreline before the break, with the pick of their chances coming through striker Harry Panayiotou half an hour in, whose rasping drive inside the area was kept out in an unorthodox but remarkable manner by the face of Josh Lillis. Tyler French was on hand to sweep up the immediate danger.

Despite no clear-cut chances to begin the second half, it was not without its eventful nature, with Luke Burke receiving treatment for an injury and a consequent touchline altercation between several members of coaching staff resulting in bookings for Lee Jones and Aldershot boss Danny Searle.

Proctor and Williams both saw efforts flash just wide, as the Shots were thwarted by an excellently organised Coasters defensive unit.

The introductions of Tom Walker, Kurt Willoughby and Tom Miller provided a fresh impact on the game to help see the result out, with Walker not far off from a late free-kick won by Willoughby 25 yards from goal.

Searle’s side pushed for a leveller late on but struggled to muster any clear chances, with key blocks made by the Coasters’ defence, to ultimately earn a clean sheet and a much-needed and deserved three points.