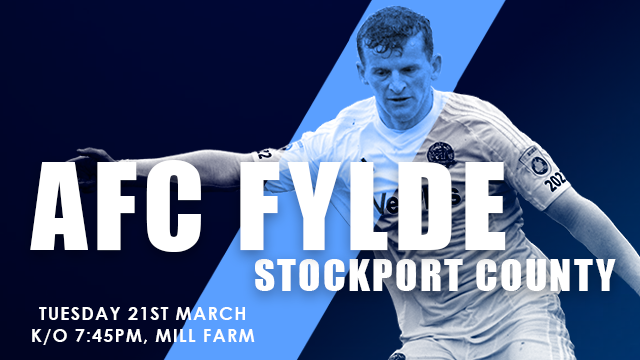 AFC Fylde played out their first goalless draw of the season in a closely-fought encounter against promotion-hopefuls Stockport County.

In a game of few clear cut chances, Sefton Gonzales spurned the best opportunity for the visitors hitting the post from two yards out whilst home striker Danny Rowe went close with a couple of dangerous set-pieces.

The result saw Fylde’s lead at the top of the National League North cut to nine points with seven games to play following Kidderminster Harriers’ late winner at Tamworth.

Manager Dave Challinor made just one change to the side that sealed a dramatic 2-2 draw against Kidderminster four days earlier with Matty Hughes replacing Josh Kay wide right.

Fylde were quickly out of the blocks under the floodlights at Mill Farm, Laurence Maguire going close to opening his account for the club inside five minutes when he nodded Brendon Daniels’ corner goalwards however the defence was back in the nick of time.

The Coasters had their opponents pegged back in the early stages and Sam Finley’s eyes lit up as a loose ball rolled into his path 30 yards from goal and although his first time effort was well-struck, former Fylde stopper Ben Hinchliffe got down to push the shot wide.

Maguire had second glorious chance to break the deadlock on 20 minutes but miscued his header from another dangerous Daniels inswinger and the keeper claimed.

Coasters midfielder Dan Bradley had a couple of decent opportunities in as many minutes as he watched a long range drive fly narrowly over the bar before his snap-shot inside the area was pounced upon at the second time of asking by Hinchliffe.

Stockport were edging themselves back into the contest and were a whisker from opening the scoring in what would have been fortunate circumstances as James Ball’s corner evaded everyone in the area and flashed wide of the far post.

Play raced up to the other end of the pitch and Matty Hughes thought he had scored with a left-footed strike that was destined for the top corner, however Michael Clarke was on hand to head off the line.

Top scorer Danny Rowe had his first real chance of the game on the stroke of half-time when his free-kick from 25 yards was tipped over the bar by Hinchliffe.

Stockport fashioned the first opening after the break when Ball whipped in a wicked cross from the right that was headed into the path of Sam Minihan, however the right-back scuffed his effort at Rhys Taylor in the Fylde goal.

Matty Hughes flashed one wide after tricking his way past his marker on the edge of the box as the two sides battled it out.

Rowe tested his former teammate Hinchliffe with a rasping free-kick from fully 35 yards before Finley had a strike deflected wide of the post as the hosts’ momentum started to build.

Fylde were given a huge let off shortly after the hour-mark when Danny Lloyd’s fierce strike from the left of the box was palmed into the path of Sefton Gonzales who inexplicably rattled the post from two yards out.

Midfield starlet James Hardy was introduced with 15 minutes to play and was desperately close to providing the opening goal when his defence-splitting pass found Hughes racing clear but the winger’s first time poke at goal was smothered by Hinchliffe.

The unlikely figure of Caspar Hughes almost nicked it late on when his looping cross-shot from the right wing dropped inches over the bar.