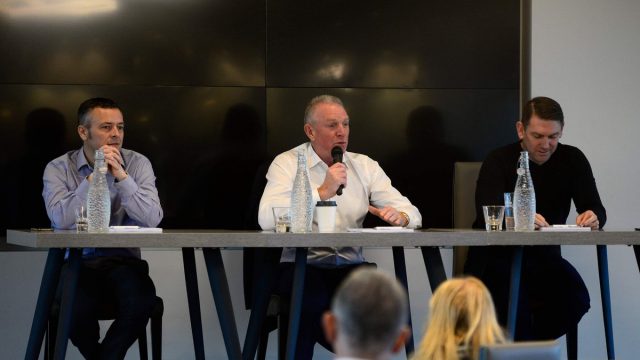 Last Saturday, AFC Fylde ran their first Fans’ Forum of the season. The panel was made up of First Team Manager, Dave Challinor, Chairman, David Haythornthwaite and Chief Executive, Jamie Roberts as they took questions from the supporters.

The event was well attended and due to the success, it was agreed that there would be further events throughout the season with details to be confirmed at a later date.

For fans who were unable to attend we have listed the key questions and answers from the event below.

Q: How do you think Fylde are doing this season?

DC: I think we’ve started the season really well. You can only really compare it to last season and we’ve improved in almost every way.

Q: We seem to have lost a bit of creativity in midfield, will the attacking element of the midfield be strengthened?

DC: Losing several midfield players last year we’ve had to adapt and with Lewis out we’ve had to play Croasdale in a more defensive role. Teams have come to Mill Farm and set up more defensively and I’m hoping that Nick (Haughton) will be a big part of the side and making us more dangerous going forward. I’ve also been looking to utilise the loan market, we’ve enquired about an awful lot of players and we are always looking for potential signings.

Q: I’d like to know the stats surrounding Ryan Croasdale. I think he’s an excellent player and he’s been our best player so far.

DC: Crozzy has come in and done a great job in a different role to what he is used to. He keeps the midfield ticking and stats wise he runs 13km a game.

Q: Are you looking to add anyone upfront?

DC: We’ve spoke about adapting our game and we’ve asked Rowey to perform different tasks especially against Maidenhead when we put Gime upfront with him. We’re always looking at different ways to improve the side.

Q: Can you tell us how our injured players are doing?

DC: Lewis had a stress fracture in his metatarsal, he’s been on the treadmill recently and he’ll do another treadmill session today. I don’t envisage him being too far away from a return. Danny Kane will be back on the grass next week. Danny Williams took a knock in training and will be back soon. James felt a pain in his stomach after the Chesterfield game and has been struggling with a suspected hernia several times in the last 12-18 months.

Q: Is there any future plans to include a stadium tour in future fan engagement events.

DH: Our plan is to have four fan forums per year. I always forget many fans haven’t been round and seen all parts of the ground. We love to show off the great facilities we have.

Q: How are you looking to bring in younger fans to the club?

DH: We currently run the super sevens initiative which has been a great success. Every child is given a free kit and season ticket when they come to a game.

Q: What is the future for Mill Farm?

DH: We’re currently building a hotel on the top floor, a new sky club above Churchills. We’ve installed new windows around the ground and the views up at the top are amazing. The North Stand will be built to become our home end. The new North Stand will be bigger than the South and will be standing. Everything will be in place to ensure we are ready for the Football League.

Q: Is there a plan to entice Football League season ticket holders to come to games?

DH: We have implemented this in the past and had some criticism. It’s very difficult to keep everyone happy but we’re open to all suggestions to get more people through the gate.

Q: Will there be any more merchandise brought into the club shop.

Q: We don’t tend to see messages about players leaving the club. Will this change?

JR: We’ve gone quite a while without a full-time press officer. We have now recruited a press officer who starts very soon so informing the fans more is something that will be improved on.