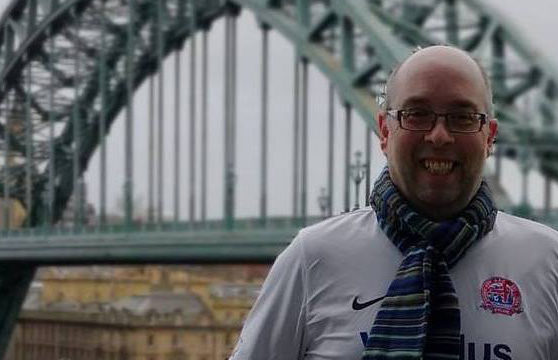 Re-Born To Be Fylde | Declan Sheridan

‘Re-Born To Be Fylde’ is a feature in our match day programme, where we get to know you, the supporters, a bit better!

Taking a look back on the series throughout the season, we want to share the thoughts of Declan Sheridan.

How did you come to support AFC Fylde?

I stumbled on the club completely by chance! I hadn’t moved to Wesham long, I think it was 2012, when one Sunday afternoon driving back from Lytham I spotted some banners in a field by Ribby Hall saying something like “stop the stadium.” At home I got the laptop out, did a bit of internet research and landed on the Fylde website! I’d only ever heard of the Rugby club so was surprised to discover there was a football club on my doorstep!

Did you, or do you, support another team?

It’s no secret that I support my home town club Bristol Rovers. I’ve been gradually working my way up the country with work since the early 90’s, so although I kept my season ticket until the early 2000’s, priorities change and I was missing more games than I was going to. I now coincide family visits home to include a home game and get to as many North West away games as I can, providing they don’t clash with Fylde.

What was your first game, and how did it hook you?

My mum’s side of the family comes from Hednesford, so my first game had to be against Hednesford Town at Kellamergh Park in the 2012/13 season.

I remember turning up just before kick off and was looking for somewhere to park. I was waved straight into the visiting directors parking space and spent most of the game waiting for the announcement to be made for the owner of a Jaguar to move it pronto!

What is your pre-match routine?

Last season, my Saturday pre-match routine consisted of trying to be up in time to get to Stanley Park for 9am to do Park Run! I usually join up with Ian Whitby my “partner in Fylde” at about 1pm, and we head over to either to Bradleys or the Education Centre for a drink. It’s compulsory to buy a half time draw ticket and, when we can, a golden goal ticket. A steak and ale pie is a must, as is standing close to the half way line!

What is your favourite thing about supporting the Coasters?

Belonging. I get the same feeling at a Fylde game as I do at Rovers game, that I’m part of something and that they are both my club.

What has been your best day as a Fylde fan?

It’s tempting to say the Trophy final but I think it was winning away at Boston to clinch the National League North title.

Which goal sent you the craziest, of all the goals you have seen?

Danny Rowe away at Wigan in the FA Cup! I didn’t see the goal as I was working in Ipswich at the time but I was listening to the game on the BBC Sport App on my phone in my hotel room. I went mental when the goal went in – I made so much noise that the person in the next room banged on the wall!

Who do you see as our biggest rivals?

Probably Chorley or Barrow, as there is always a bit of an edge to the games against them, plus the fact they bring a good away following, adds a bit of extra spice.

Who is your favourite all time Coasters’ player?

I’d have said Johnny Smith if he hadn’t been on loan from Bristol City. So it probably has to be Bohan Dixon. You never knew what you were going to get when he played, so I liked the fact he was unpredictable. Above all else he had the best songs.