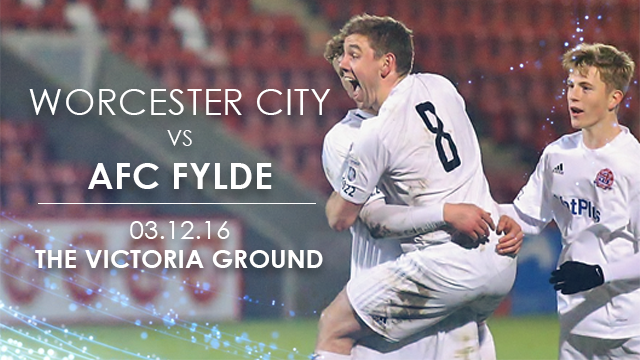 AFC Fylde switch their attention back to the league schedule this weekend with a trip to Worcester City.

The Coasters secured their place in the first round of the FA Trophy last time out with a dramatic 3-2 victory over Gloucester City but now look to maintain their lead at the top of the National League North.

Dave Challinor’s side sit four points ahead of their closest rivals Chorley, with a game in hand, and could extend the lead further still with Chorley’s game at FC Halifax Town postponed.

The in-form hitman followed that up with his sixth hat-trick of the season against Gloucester on Saturday to take his personal tally to 31 for the season. Rowe’s third and winning goal at Whaddon Road was his 99th for the club in under two-and-a-half seasons.

Worcester have been steady during the first half of the season and currently sit in 13th place in the table. Worcester too reached the first round of the FA Trophy at the weekend with a 2-1 victory over Curzon Ashton, but suffered a 3-0 defeat against Salford City in their last league fixture.

Fylde and Worcester shared the spoils in the previous meeting – a 2-2 draw on the final day of last season – however Worcester were victorious on their trip to Kellamergh Park earlier last season.