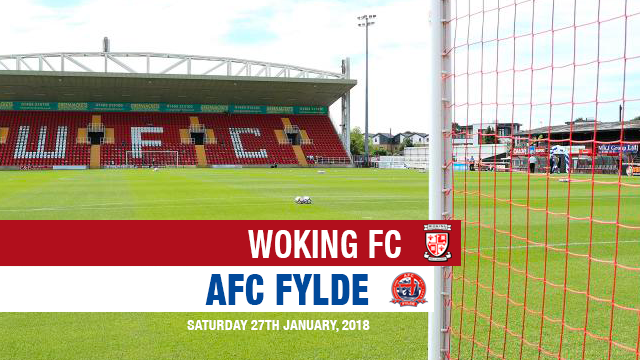 The run goes on!

AFC Fylde will be hoping to continue the sensational form that has seem them storm the National League play-off when they travel to Woking this weekend.

A 3-0 victory over Maidstone United on Tuesday made it six wins from seven for the form team of the league.

The Coasters have picked up 16 points since the turn of the year, more than any other team in the country – seven points more than runaway Premier League leaders Manchester City!

Victory over Maidstone moved the Coasters into the play-off places, however the third goal thrust Fylde up another place into sixth – their highest position in the club’s history and within the top 100 places in the country.

Following Saturday’s 6-0 demolition of league leaders Macclesfield Town, the Coasters have scored nine goals with no reply in just two games, with seven different names on the scoresheet.

After a bright start to the campaign, Woking are on a woeful run of form and currently find themselves without a win in their last 13 games in all competitions.

Their last victory came at home to Ebbsfleet United back in mid-November. Since then, Anthony Limbrick’s side have picked up just three points from a possible 27.

Last time out they conceded late on to drop points at home in a 1-1 draw against Gateshead and sit in 16th place in the table with 36 points.

Fylde’s last home defeat – all the way back in September – coincidently came against this weekend’s opponents.

The Coasters surrendered a half-time lead as they went down 2-1 against Woking at Mill Farm. The hosts looked in complete control following Jordan Tunnicliffe’s opener, however two-goals in under a minute shortly after the break ensured the visitors took all three points back to Surrey.

Team news:
Manager Dave Challinor has stuck with the same team for two games running and may potentially stick with a winning formula this weekend.

His squad received a welcome boost this week with the return of two of his most creative players. Both James Hardy and Henry Jones played a behind closed doors against a strong Preston North End side on Wednesday. Hardy completed 50 minutes and Jones was handed 66 minutes on their return from long-term injuries.