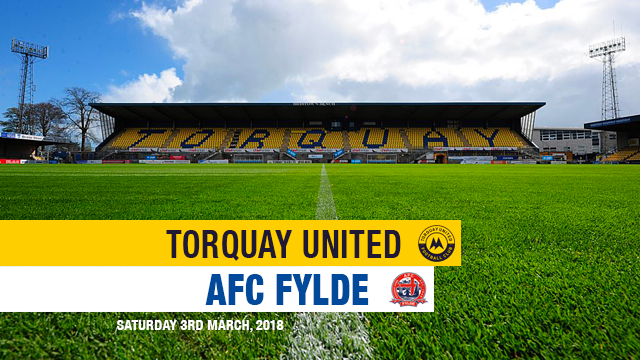 Forget the usual bucket and spade, AFC Fylde could be heading to a winter wonderland in Torquay this weekend!

After disappointing back-to-back defeats, the Coasters were back at their best last weekend when Dover Athletic came to Town.

Despite falling behind to Mitch Pinnock’s second-half strike, an electric final 20 minutes saw Dave Challinor’s side turn the game on its head.

Striker Danny Rowe levelled the scores with his 19th league goal of the season, keeping him clear at the top of the National League scoring charts, before 17-year-old Serhat Tasdemir completed the comeback with an emphatic strike.

Midfielder James Hardy, who has been called up by England C for their friendly against Wales later this month, put the icing on the cake with a neat finish in the final seconds.

The three points lifted Fylde back into the play-off places, level points with eighth-placed Ebbsfleet United and one ahead of Dover who have a game in hand.

Torquay have endured a torrid time since their relegation from League Two last summer and currently find themselves nine points adrift of safety.

Their form at the start of the month had given the Devon outfit a glimmer of hope after back-to-back victories over Barrow and Maidenhead United, however consecutive defeats against Dagenham & Redbridge and Sutton United sees them second-bottom of the pile. A Danny Rowe double helped the Coasters to a comfortable 2-0 victory over the Gulls in the reverse fixture back in November.

Please note that following discussions between both clubs and the National League, there will be a planned pitch inspection at 8:30am tomorrow morning (Friday) ahead of Saturday’s trip.

Adverse weather conditions are expected in the south west and both ourselves and Torquay want to give travelling supporters as much notice as possible of any potential postponement.

A further update will be published following the inspection.

Six games in the National League have already been postponed due to the weather (See below).

Plainmoor Stadium is situated in Plainmoor, a suburb of Torquay and is within walking distance of Torquay town centre.

By Train: Torre Station is the nearest rail stop to Plainmoor. There is then a 20-25 minute walk for those wanting a slightly challenging walk to Plainmoor.

By Car: The new South Devon Link Road has aided fans getting to Plainmoor. It runs from Newton Abbot to Torquay and is a much-needed improvement for home and away fans.

There is no dedicated parking at Plainmoor. Fans are asked to get to the ground early to find parking spaces on the street.