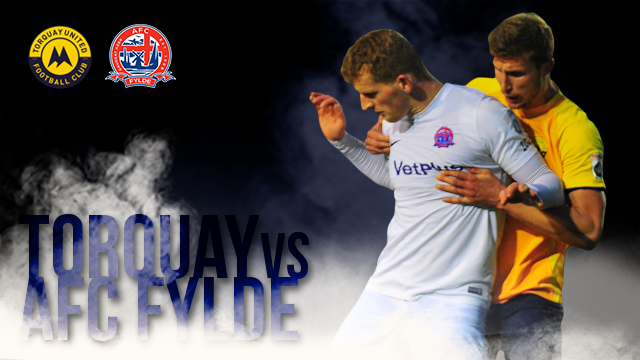 Just four games to go! The Coasters travel to the seaside town of Torquay tomorrow looking to consolidate their place in the National League play-offs!

Fylde gatecrashed the promotion places a week ago with three points at Barrow and further strengthened their position with a fantastic comeback victory over second-placed Sutton United on Saturday.

Dave Challinor’s side trailed their high-flying opponents after a disappointing first-half showing, however late goals from Jonny Smith and Danny Rowe sealed a third straight win.

On-loan winger Smith brought his league goal tally to nine after scoring in each of his last three games, whilst Rowe has two in two and leads the scoring charts with 24 for the season.

Victory over Sutton has made it tighter than ever at the top of the league, with just four points separating the six play-off place holders.

Dover Athletic are still hot on the Coasters’ heels, sitting just one point behind in eighth position.

If the Coasters were to win their remaining four games then a play-off spot would be guaranteed, but there could yet be plenty more twists and turns!

Torquay have endured a torrid time since their relegation from League Two last summer and currently find themselves seven points from safety with five games to go after a 1-0 loss against Dover.

And with Elliott Romain and Rhys Healey both sent off, it was a day to forget for the Gulls as they continue to desperately scrap for their lives.

A Danny Rowe double helped the Coasters to a comfortable 2-0 victory over Torquay in the reverse fixture back in November.

Plainmoor Stadium is situated in Plainmoor, a suburb of Torquay and is within walking distance of Torquay town centre.

By Train: Torre Station is the nearest rail stop to Plainmoor. There is then a 20-25 minute walk for those wanting a slightly challenging walk to Plainmoor.

By Car: The new South Devon Link Road has aided fans getting to Plainmoor. It runs from Newton Abbot to Torquay and is a much-needed improvement for home and away fans.

There is no dedicated parking at Plainmoor. Fans are asked to get to the ground early to find parking spaces on the street.