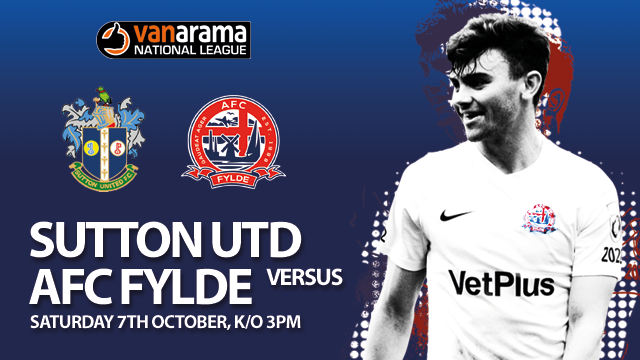 AFC Fylde head back to the Capital this weekend for the National League clash against high-flying Sutton United.

Dave Challinor’s side secure a fantastic win down in London last weekend with a 2-1 victory over Leyton Orient and followed up with a resolute goalless draw against Gateshead on Tuesday evening.

Coasters winger Jonny Smith went closest to breaking the deadlock for the hosts after rounding goalkeeper James Montgomery however he saw his effort cleared off the line.

At the other end, Gateshead had a glorious opportunity to win the game when they were awarded a penalty for Danny Rowe’s foul however Paddy McLaughlin put his penalty wide of Jay Lynch’s left-hand post.

Four points in four days has seen Fylde climb a place in the National League table and they now sit in 19th position on 16 points after 14 games with a record of three wins, seven draws and four defeats.

Sutton are riding high at the top end of the table and occupy a Play-Off spot, just two points behind new league leaders Macclesfield.

They have drawn their last two games against fellow promotions Wrexham (1-1) and Dover Athletic (2-2), scoring a last minute equaliser against the Welsh side at the weekend before getting a taste of their own medicine when they suffered the same fate at the hands of Dover on Tuesday night.

Sutton, alongside Bromley and Maidstone United, are one of three sides in the league that play on a 3G pitch.

Managed by Paul Doswell, Sutton rose to prominence last season following their sensational run in the FA Cup, when they beat Championship side Leeds United to reach the last 16 before they were eventually knocked out by Premier League giants Arsenal.

This season, they have won seven of their 14 games, drawing three and losing four and have 24 points, putting them fifth in the table.

Team news:
Midfield duo Andy Bond and Lewis Montrose return to the Coasters squad for the weekend after serving one-match suspensions. Fellow midfielder Jason Taylor will be hoping to make his Coasters bow after joining the club on Tuesday.

Admission:
Sutton are offering special ticket prices to celebrate Non League Day and admission to the match is FREE for ALL juniors aged 16 and under.

Season ticket holders of ALL Premier League, Championship, EFL and other Non-League clubs can gain admission to this match for just £5 per person (simply present your club’s season ticket at the turnstile to get this special price). This includes Fylde supporters.

General admission prices for this match have also been reduced to just £12 for adults and £6 for concessions.

Directions:
Travel along the M25 to junction 8. Then north on the A217 for about 15-20 minutes. Ignoring signs for Sutton itself, stay on the A217 to the traffic lights by the Gander Inn (on the left), turn right into Gander Green Lane. The Borough Sports Ground is about 200 yards up this road on the left hand side, if you reach West Sutton station you have gone too far.

Parking:
On match days for the 2017-18 season the club car park is for car park ticket holders only. Parking is available in local side streets (please park considerately) and in town centre car parks a 5-10 minute walk away from the ground.