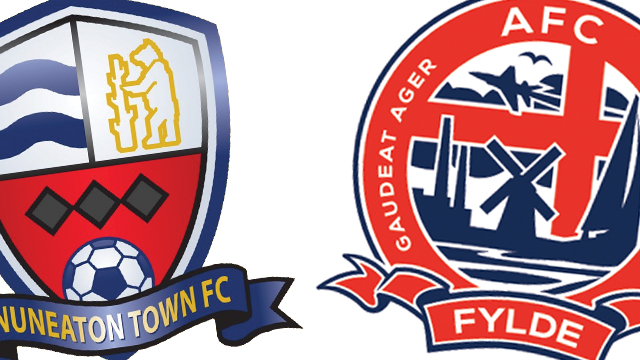 AFC Fylde are aiming to reclaim their place in the play-offs tomorrow evening against fellow promotion hopefuls Nuneaton Town.

The Coasters slipped out of the top five in the National League North following a 1-0 home defeat against Alfreton Town.

Several of the sides at the top of the table dropped points at the weekend with Solihull Moors losing at Tamworth and North Ferriby United tasting defeat at FC United, whilst Harrogate were held to a goalless draw against Gloucester City.

Dave Challinor’s side still trail top spot by ten points, but have at least one game in hand on the five teams above.

Fylde face Nuneaton twice this month after the tomorrow night’s original date was rearranged due to our involvement in the FA Trophy.

Nuneaton leapfrogged the Coasters in the league standings this weekend following their 3-1 away victory over Corby Town on Saturday.

They are currently unbeaten in their last four matches, picking up eight points including victories over Brackley Town and Corby.

Striker Aaron Williams led the goalscoring charts at Nuneaton with 16 goals in all competitions before joining Peterborough United a month ago, whilst former Premier League star Marlon Harewood has 11 strikes to his name. Boro are aiming to return to the National League following their relegation last season.

Coasters boss Challinor is hopeful of having full-back Caspar Hughes back for the trip as well as midfielder Brad Barnes, who missed the weekend’s match through illness. Sam Finley will miss the next three matches though suspension following his red card against Lowestoft Town.

Admission:
Adults – £13
Ages 11 to 16 – £3
Ages 10 and under – Free but must be accompanied by an adult.
Transfer to the Main Stand seats, if required, is an additional £2 which is paid within the ground.

Car Parking:
Available on site – £2 for Cars, £5 for Minibuses and £10 for Coaches.
Parking is also available on the adjacent industrial estate but please be careful not to block any of the business entrances.

Supporters Bar:
When games are not segregated visiting supporters are welcome to use our bar facilities at the ground. The ‘Legends Lounge’ bar is located in the corner of the ground next to the Boro Shop.