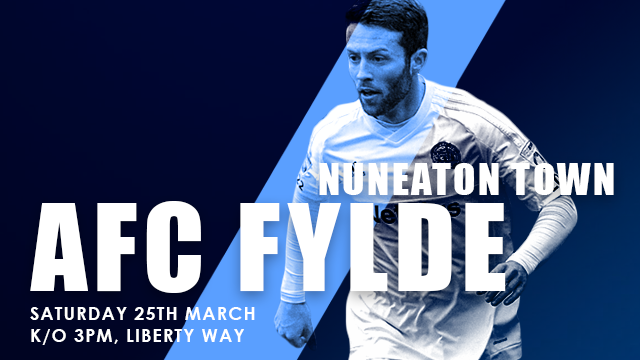 The title charge continues this weekend at Nuneaton Town with just seven games left to play!

Fylde’s lead at the top of the National League North was cut to nine points on Tuesday evening after rivals Kidderminster Harriers netted a last minute winner in a thrilling 4-3 victory over Tamworth.

Elsewhere, third-placed Salford City and fourth-placed Chorley played out a 1-1 draw as they look to secure their place in the top five.

The Coasters earned a credible goalless draw against Stockport County – our first of the season – last time out at Mill Farm to extend the current unbeaten run to seven games.

Saturday’s hosts Nuneaton are the form team in the league having picked up 10 points from their last five games. However, 15-goal striker Joe Ironside departed for pastures new earlier in the week when he joined Kidderminster.

Nuneaton currently sit in 14th place in the table and saw off doomed Altrincham 3-1 during midweek.

Fylde have now equalled their points tally (75) from last season with seven games remaining. However, the last year’s tally of 76 goals has been well surpassed already. Thanks partly to Danny Rowe’s incredible 40-goal haul, the Coasters have notched 94 times this term – just nine short of the record (103) set by Chester in 2012-13.

Rowe himself is just three goals short of equalling the record for an individual player set by Damien Reeves for Altrincham in 2011-12.

Team news:
Midfielder James Hardy will be hoping for a starting spot after coming off the bench in the previous two games, whilst fellow midfielder David Morgan could return from injury for the game. Captain Josh Langley is still another week away from a return. Defender Dom Collins, who limped off against Stockport on Tuesday, faces a late fitness test.