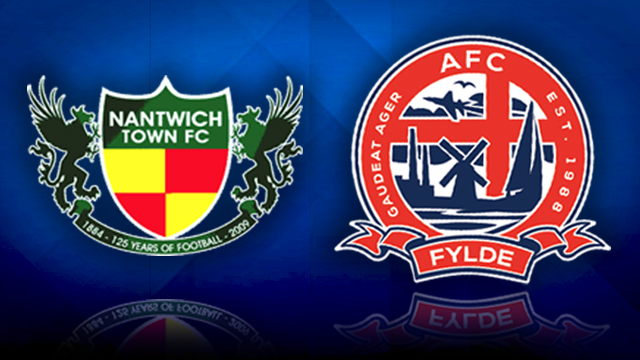 The Coasters take on Nantwich Town on Saturday in their third pre-season outing ahead of the 2016-17 National League North campaign.

Fylde are still looking for their first pre-season victory after narrow defeats against Stranraer (2-0) and Rochdale (2-1).

New signings Brendon Daniels and Steve Williams have featured in both warm up matches so far and fellow new boy Andy Bond could get his first run out at The Weaver Stadium this weekend.

The Evo-Stik Northern Premier League side are also two games into their preparations after a 4-1 win at Alsager Town and a goalless draw with Curzon Ashton on Tuesday night.

Nantwich enjoyed a solid 2015-16 season finishing in eighth place in the table, 11 points outside the play-off places.

Liam Shotton, older brother of Birmingham City defender Ryan, was topscorer last season after plundering 24 goals in all competitions, whilst fellow forward Elliott Osbourne was hot on his heels with 22 strikes.

Dave Challinor has already used 27 players in the opening two matches, casting his eye over several trialists as his builds his squad for new term.

Midfielders Richie Baker and Andy Bond have missed both friendlies through minor injuries but could feature on Saturday. There are a limited number of car parking spaces at the ground. There is also a nearby long stay car park at the local swimming baths and that is the best place to park should there be no space at the ground. It costs £2.10 for 2-4 hours and £2.90 for up to 10 hours, so offers a cheap and well located place to leave your car, with the ground and the town centre in easy walking distance.

The stadium is not far from the train station in Nantwich. Turn right out of the station and walk to the roundabout. Turn left and follow the road/path round the right and walk to the traffic lights next to the River Weaver. Head over the junction and keep following the main road. You will see the stadium on your right. The whole journey is just less than a mile and should take no more than 10-15 minutes.