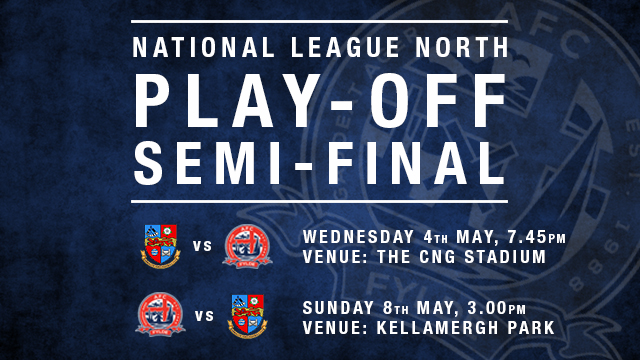 AFC Fylde embark on a second consecutive National League North play-off campaign tomorrow as we look to banish the disappointment of last year.

A 2-2 draw away at Worcester City confirmed Fylde’s third place finish in the league and the Coasters will now take on Harrogate Town in the semi-final. Second placed North Ferriby United and fifth placed Boston United will go head to head in the other semi for a place in next weekend’s final.

Both ourselves and Boston suffered play-off heartbreak last season and Dave Challinor’s side will be desperate to go one better this time around ahead of the summer move to Mill Farm.

A first-half double at the weekend from star striker Danny Rowe looked to be sending the Coasters into the play-offs on the back of three points and in second place in the league, however two second-half goals from Worcester knocked Fylde back down to third in the league standings.

Rowe’s brace brought him to 24 league goals and earned him the accolade of the NLN’s top scorer – an award he must share with Boston’s Dayle Southwell, who grabbed a hat-trick in a 5-0 victory over Stalybridge Celtic at the weekend.

Tomorrow night’s opposition signed off from the season in style with a resounding 5-0 victory over relegated Corby Town. Dangerman Brendan Daniels threatened to stake a claim for the top scorer award, netting twice in the opening seven minutes of the game, however he ended up with 22 league strikes – no mean feat considering he is a winger!

The two clubs met just ten days ago in the penultimate league game with Fylde running out 2-1 winners thanks to goals from Rowe and James Hardy.

The second leg will be played out at Kellamergh Park on Sunday 8th May (k/o 3pm).

Team news:
Josh Langley and Sam Finley both returned to the starting line-up at the Aggborough Stadium on Saturday and are likely to be involved again at Harrogate. Defenders Adam Sumner and Dom Collins are the only injury doubts ahead of the game. 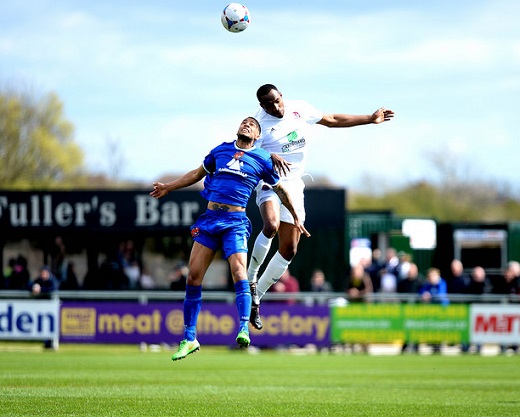