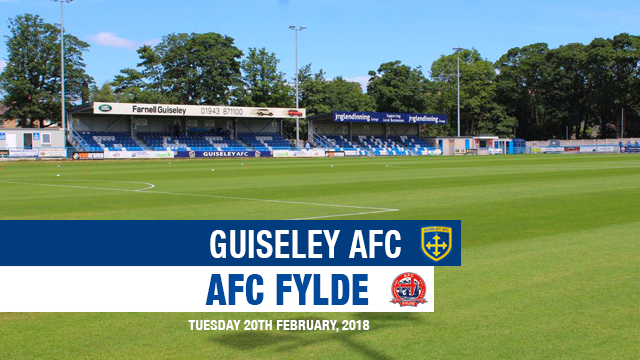 AFC Fylde travel to bottom of the table Guiseley tonight as they look to get their play-off push back to track.

The Coasters suffered a minor set-back last time out in their challenge for a place in the top seven, slipping to a narrow 1-0 defeat against Leyton Orient.

Macauley Bonne’s controversial penalty earned Orient all three points in a tight game at Mill Farm, however results elsewhere ensured that the Coasters remained in the play-off places.

Dave Challinor’s side are one point ahead of Bromley and Dover Athletic, however both clubs have a game in hand.

Tonight’s opponents have endured a rotten season and have propped up the table for the majority of the campaign.

Former Barrow boss Paul Cox was appointed in September in an attempt to turn their form around after just one win from their opening eight matches. However, with the Lions still rock-bottom of the National League, Cox departed last week with former Republic of Ireland international Sean St Ledger taking the reins as caretaker manager.

The ex-Preston North End defender suffered defeat in his first game in charge – a 3-1 reverse against Maidenhead United – extended Guiseley’s losing streak to seven and without a win in nine.

St Ledger remained positive despite their situation: “The good thing about the situation is that we do have another game on Tuesday and you cannot be too disappointed when there is another game around the corner. It is another chance to pick up three points.

“I said to the lads that they have to stay positive. There are 13 games left and the games are going down. I’m sure the old management said that so I don’t want to sound like a parrot, but it has to happen sooner rather than later.”

His opposite number Challinor said: “We have to get back to winning straight away and hopefully we can do that tonight.

“We face a different challenge at Guiseley, but it makes very little difference who or where you play in this league. Top, bottom, home, away, it’s all so unpredictable and anything can happen.”

The Coasters go in search of their first league double of the season this evening following the 2-1 victory over Guiseley a month ago.

After the scheduled fixture was postponed in November, the two old foes when head-to-head in January with Danny Rowe’s stunning late strike sealing a deserved 2-1 victory for Fylde.

The Coasters return to Mill Farm this weekend when they host fellow promotion hopefuls Dover.

Fylde: Dave Challinor has no fresh injury concerns and, aside from long-term absentee Josh Langley, should have a full compliment of players to select from.

Guiseley: Midfielder Liam Hughes, who signed for the Lions in late November from Barrow, has joined Billericay Town for an undisclosed fee.