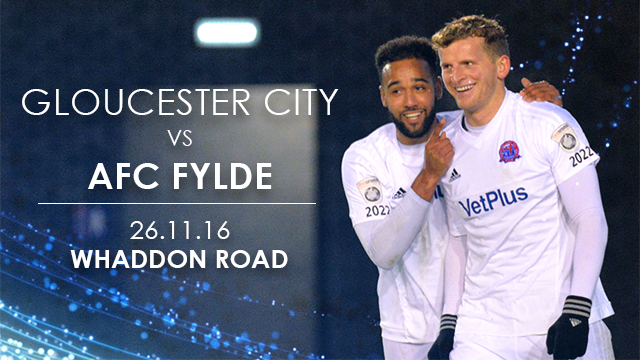 AFC Fylde take a break from league action this week as they travel to face Gloucester City in the third qualifying round of the FA Trophy.

The Coasters reached the last 16 of the tournament last season before a narrow 1-0 loss to National League side Gateshead ended hopes of Wembley glory.

There will be plenty of confident flowing through the Fylde players, however, after last weekend’s stunning 9-2 victory over Boston United at Mill Farm.

Danny Rowe took his personal tally for the season to 28 goals in just 19 NLN games, already four more than he managed in the league last season.

Brendon Daniels, Andy Bond and Josh Langley all scored their first goals at Mill Farm whilst James Hardy capped off his dream week with a goal and four assists after starring for England C in Estonia.

New signing Darren Stephenson will also be hoping for his first appearance in a Coasters shirt after his loan signing from Tranmere Rovers was completed this week.

Gloucester have already posed problems for Fylde this season, holding Dave Challinor’s men to a 2-2 draw at Mill Farm on a soaking wet afternoon in September.

Tim Harris’ men sit just outside the playoff places after an impressive start to the season but have hit a run of poor form recently, losing their last three games in the league.

This is the first of two trips to Whaddon Road for Fylde in three weeks as they face Gloucester in the reverse league fixture on the 17th December.