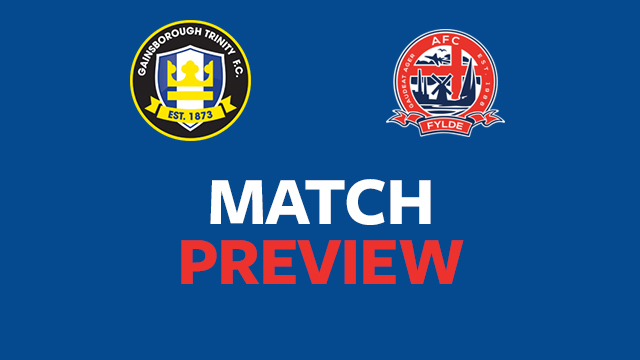 The Coasters will be hoping to continue their 100 per cent record in 2016 following victory over Chorley in the first match of the new year.

Dave Challinor’s side kicked off 2016 with a well-deserved three points at Kellamergh Park against the Magpies, courtesy of a late Danny Rowe thunderbolt.

The result left Fylde in fifth position in the league standings, just four points behind top spot. However, league leaders Solihull Moors enjoyed a 3-0 victory over Brackley Town earlier this week and now sit seven points clear of the Coasters, having played one game more, at the mid-point of the season.

Gainsborough have enjoyed a decent campaign so far and currently sit in 10th place in the table. Their home form has been impressive, winning six and losing just two of their 10 matches so far, however their form on the road has let them down with nine defeats from 13 games.

They have lost three of their last four matches, however the one victory was an impressive 2-0 victory over high-flying North Ferriby United on Boxing Day. Ferriby got their revenge last time out, cruising to a 4-0 win.

The match also presents the chance for Challinor to record his 150th victory at the club, whilst Danny Rowe could net his 50th goal in Fylde colours.

Injured Coasters duo Tom Hannigan and Richie Baker both returned to first team action and Challinor is hopeful that a couple more could be involved this weekend.

“We travel to Gainsborough Trinity this weekend to face a side that have a very good home record,” said Challinor. “They gave us a tough game there last year towards the end of the season, but we know that we have to go and win.

“Injuries are starting to clear up now, but we are still picking up little niggles and other things are taking slightly longer than we had hoped. To get Tom (Hannigan) back was great and he has had no adverse effects from the game.

“Brad Barnes is back training and he joined a few other first team lads in a development squad game during the week, including Matt Urwin, in a bid to get some minutes under their belts, so we are getting there.

“We were hoping Matty Hughes would be fit for the match, but he had a bit of a reaction earlier in the week so we will have to wait and see with him.

“We just need to get people up to speed now as we want to have 20 players to pick from each week and have different options for different games.”