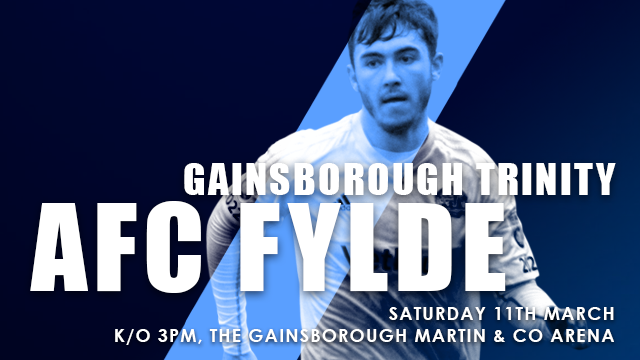 The Coasters currently lead the National League North table by 11 points after last weekend’s 3-3 draw away at Harrogate Town. Fylde twice came from behind to earn a late point at the CNG Stadium – substitute Matty Hughes sliding home the equaliser with four minutes to play to send the visiting fans wild!

The point turned out to be a huge one after second-placed Salford City were beaten 2-0 away at Tamworth and fellow title rivals Kidderminster Harriers suffered defeat at the hands of FC United of Manchester.

Saturday’s hosts Gainsborough are on a disappointing run of form, having picked up just one point from their previous five games. The are currently hovering dangerously close to the drop zone, just one point above third-bottom Worcester City. Last time out they were beaten 2-1 away at Nuneaton.

The Coasters ran out 3-1 winners in the reverse fixture back in September, with James Hardy, Danny Rowe and debutant Dan Bradley doing the damage.

Fylde are yet to suffer defeat against Trinity in the six previous meetings, with four victories and two draws.

Coasters boss Dave Challinor said: “As ever we are expecting a tough game and the pitch won’t be great. A new manager has come in and they have made quite a few changes in terms of personnel. They have also tried out a couple of different systems so we don’t know exactly what to expect. But we will be concentrating more on what we do. We have to go there and grind out a win.”

Trinity manager Dave Frecklington told Gainsborough website: “We have to contend with a Fylde team who are flying and looking set for promotion to the National League. It’s going to be very tough but we have to be organised and positive. What is the point in just turning up. Win or lose on Saturday, if the players can come off the pitch and look at themselves in the mirror and say I couldn’t have given any more that’s all myself and Terry can ask.”

Team news:
Captain Josh Langley underwent surgery on his groin earlier in the week and is expected to return to action within four weeks. Midfielder James Hardy is undergoing his rehab and could be available for the Kidderminster Harriers clash next weekend.