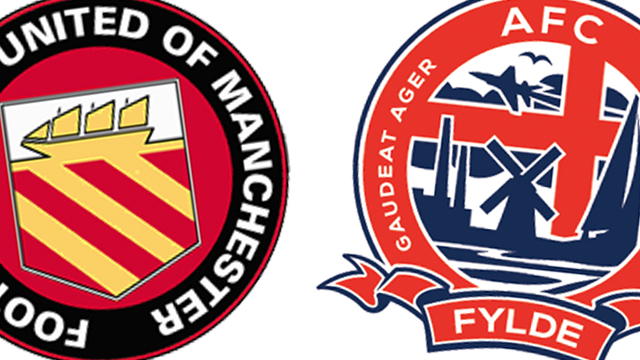 Back-to-back victories in the league has seen AFC Fylde climb up to third place in the table ahead of Saturday’s trip to FC United of Manchester.

The Coasters leapfrogged Boston United at the weekend with a 5-2 victory over the Pilgrims and jumped above North Ferriby United following the 2-1 home win against Corby Town on Tuesday night.

Dave Challinor’s side completed a second league double in the space of four days with victory over the Steelmen, but it came at a cost. Danny Rowe’s brace sealed all three points, but new man Bohan Dixon picked up his 10th booking of the season and will serve a two-match suspension. To add insult to injury, fellow midfielder Richie Baker was dismissed for a second yellow card after the final whistle and will miss one match.

Rowe’s second and decisive goal of the game was a landmark 30th strike of the season and the frontman is now the leading goalscorer in the top seven divisions in the country! Click here for the full story.

FC United have endured a difficult season although victory over North Ferriby at the end of last month halted an alarming run of four consecutive defeats and they followed up the positive result with a goalless draw at Worcester City at the weekend.

Despite four points from the last two games, FC United are languishing perilously close to the relegation zone. Karl Marginson’s side are currently 17th in the table, just three points above the bottom three.

Their home form has been decent, indeed they have won more on home soil then fifth-placed Nuneaton Town, however they have won just three of their 16 matches on the road.

And it doesn’t get any easier for United on their travels as they visit league leaders Solihull Moors on Tuesday night.

Fylde ran riot in the reverse fixture at Kellamergh Park back in September, running out 4-0 winners. Sam Finley opened the scoring for the Coasters and the match sprang to life shortly before the hour mark when goalkeeper David Carnell was dismissed for bringing down Matty Hughes just outside the box. Richie Baker converted the resultant free-kick and goals from Dion Charles and Danny Rowe put the game to bed.

Coasters full-back Caspar Hughes was replaced at half-time during the midweek fixture against Corby, but should be fit for the weekend, whilst midfielder Finley has completed his three-match suspension and will be available for selection.

Just outside the play-offs, Boston return to Lancashire for a clash against Chorley, whilst Tamworth host bottom club Corby Town.

Car Parking:
If you must travel by car, please do not attempt to park on St Mary’s Road or the side streets off it. These are required by residents and we must not park there – there will be FCUM Traffic Marshalls directing you elsewhere. Your cooperation in this is required.

Disabled Access:
Broadhurst Park has excellent facilities for people with disabilities. Disabled access at the ground is through a stewarded gate next to the first set of turnstiles that you approach from the car park. Disabled seating and wheelchair spots are to be found in the main stand and in the east and west stands. Disabled parking can be arranged in advance by contacting the FC United office. Admission is the relevant standard charge for the disabled supporter and a carer gains free admission.