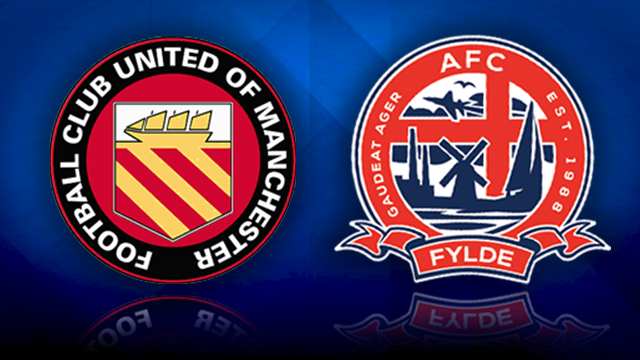 AFC Fylde are back on the road after two consecutive home matches against Gloucester City and Curzon Ashton.

The Coasters picked up four points as a 2-2 draw against Gloucester and a 4-1 victory over Curzon saw Dave Challinor’s side return to the top of the league table.

Frontman Danny Rowe is enjoying a purple patch in front of goal – his hat-trick against Curzon bringing him up to 14 goals for the season after just nine games.

FC United have endured a mediocre start to the campaign with just two victories from their opening nine fixtures.

They have won just one of their last six – a 3-2 victory away at struggling Boston United – whilst they have lost three of the last four games, most recently a 3-1 defeat away at Harrogate Town on Tuesday night.

FCUM will be disappointed with their current form kicking off with draws against Chorley and AFC Telford United and beating rivals Stockport County in their first three games.

The Coasters enjoyed good fortune against FC United last season, starting with a 4-0 victory at Kellamergh Park back in September. Goals from Danny Rowe and Tom Hannigan secured a hard-fought 2-1 win in the reverse fixture at Broadhurst Park.

Winger Brendon Daniels is still a couple of weeks from returning from a knee injury, whilst goalkeeper Rhys Taylor is making good progress but could still be out for up to a month. New man Ryan Jennings will be pushing for a starting spot after making his Coasters debut as a late substitute on Tuesday night.

Travel:
By train:
The nearest train station to Broadhurst Park is Moston on the Manchester Victoria (MCV) – Leeds line via Rochdale (RCD) provided by Northernrail. Other stations on this line include Mills Hill (MIH) and Castleton (CAS). Moston Train Station (MSO) is an 11 minute walk to Broadhurst Park. Train frequency on this line calling at Moston is every hour between 06:00 and 23:00.