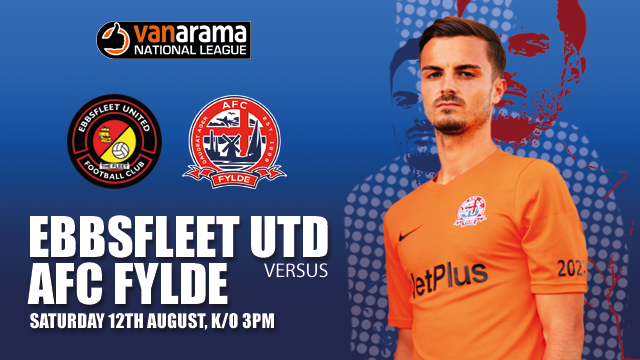 AFC Fylde make the long trip down south to Ebbsfleet United for the second away game of the week.

The Coasters have made a solid start to the new National League campaign and remain unbeaten after two games.

A 2-2 draw against Boreham Wood on the opening day was followed up with an entertaining 1-1 draw at Chester earlier in the week.

Dave Challinor’s side have shown positive signs and took the lead in both matches against established National League sides. Summer signing Jack Muldoon did the damage on Tuesday night with a classy first-time finish at the Swansway Chester Stadium, however the hosts levelled the scores a minute later through Blues midfielder Lucas Dawson.

Prolific frontman Danny Rowe will be hoping to break his goal duck for the season at Stonebridge Road. The striker needs just two goals to equal the club record of 119 goals, set by Richie Allen.

Fylde midfielders Henry Jones and Jonny Smith, who netted the crucial equaliser on the first day of the season, both made their full debut at Chester and could have had a goal each in the thrilling encounter.

Ebbsfleet have made an impressive start to the season with four points from their two games. They kicked off with a 2-2 draw away at Guiseley ahead of Tuesday’s 2-0 victory over Maidstone United.

Managed by Daryl McMahon, Ebbsfleet won promotion to the top tier of Non-League football last season after finishing second in the National League South and triumphing in the Play-Off final.

Down to ten-men in the showpiece event, Ebbsfleet came from behind against Chelmsford City to return to the National League for the first time since 2013.

Directions:
Exit the M25 at Junction 2 and take the A2 signposted Canterbury. Leave the A2 at the Northfleet/Gravesend West junction. At roundabout, follow signs to Ebbsfleet International Station/A226 which will take you on to Thamesway and past Ebbsfleet International. The stadium is at the end of the road.

Parking:
There is limited space down side streets such as Grove Road, while Thamesway is designated a ‘Clearway’ and any cars parked along there are liable to be ticketed. There is also limited space available in surrounding residential streets.

Ebbsfleet International Station offers secure matchday parking in its Car Park C for a small charge. It is just over five minutes walk from the ground and is the best bet for a parking space in the area.