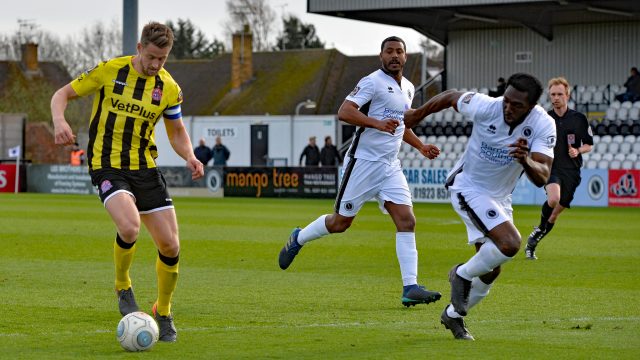 PREVIEW | Coasters look to return to winning ways in the league

It’s a return to league action for the Coasters, after over two weeks away.

A convincing 6-1 win over Peterborough Sports in the FA Cup Fourth Qualifying round sets the Coasters up nicely for this weekend, as we travel down south to Boreham Wood.

This will be John Hills and Brett Ormerod’s first league game as caretaker management and both will be looking to get off to a winning start to help push the Coasters up the table.

Whilst the search for a permanent manager still goes on, so does the hunt for a much-needed league win in the Manarama National League.

Boreham Wood are enjoying a good season with the side sitting just three points off the playoff places.

Last season saw the Wood survive by the skin of their teeth after a poor season in the league, something which they look to have put right early on this campaign.

A loss in the FA Cup to Torquay last weekend saw them exit the competition early, and with the Coasters progressing into the next round, the momentum will be with John Hills’ side.

In charge of the Wood is Luke Garrard. The former AFC Wimbledon defender has been in charge at Meadow park since 2015 and although his side were close to relegation last season, he has proved doubters wrong and has got the Wood firing again.

This week’s one to watch is forward, Tyrone Marsh.

Marsh moved to the Wood at the beginning of the season on a free transfer from Macclesfield Town in League Two.

Since moving, it has been successful for Marsh with the striker scoring several goals for his new side.

He is a player currently in-form for Boreham Wood. Scoring nine goals in 18 appearances in all competitions.

Recently, Marsh has grabbed four goals in his last six appearances showing he is in great form going into Saturday’s game.

This will be the sixth time the two sides have met, with the hosts currently having the upper hand in terms of wins.

As we look to escape from the relegation zone, there are a few fixtures to keep an eye out for: