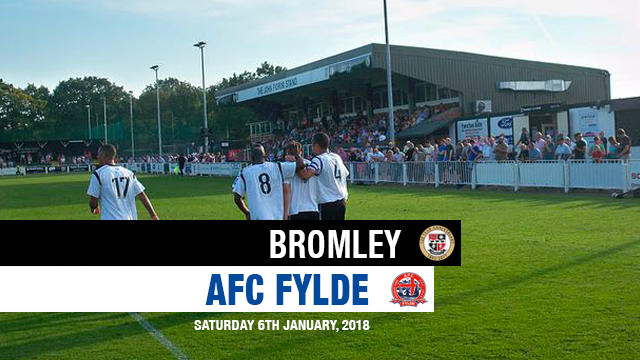 AFC Fylde tackle yet another arduous trip down south this weekend with Bromley the destination.

The Coasters are in fabulous form of late with back-to-back victories in the National League, starting the New Year as they ended 2017 – with three points!

The Coasters signed off from last year with a 2-1 victory at Maidenhead United. Despite falling a goal behind, strikes from Lewis Montrose and Jack Muldoon earned the Coasters maximum points to halt a six-game winless run in all competitions.

Dave Challinor’s side got off to the perfect start to 2018 as they exacted revenge on Tranmere Rovers. The Coasters had previously suffered a 4-1 Boxing Day defeat at Prenton Park, however an incredible 5-2 victory in the reverse fixture returned the bragging rights to Mill Farm.

Full-back Zaine Francis-Angol prodded home his first goal for the club, whilst Danny Rowe returned to the top of the National League goal charts after netting the opener against Tranmere. Jack Muldoon, Jordan Tunnicliffe and Serhat Tasdemir completed the goalscoring.

Fylde face seven games before the end of January, with 18 points to play for in the league and a place in the Lancashire Senior Cup semi-finals up for grabs.

Saturday’s opponents Bromley have enjoyed a fine first half to the season and currently occupy a play-off position.

Managed by Neil Smith, the Ravens are top scorers in the division with 46 goals in 28 games. Fylde are hot on their heels with 41 goals in 25 fixtures and have an identical goal-to-game ratio (1.64) due to their three games in hand.

Bromley frontman Louis Dennis is one-to-watch with 12 goals to his name thus far – only bettered by Leyton Orient’s Macauley Bonne and our very own Danny Rowe, both level on 13.

Two goals in as many minutes earned Fylde a share of the spoils in an entertaining 2-2 home draw against Bromley back in September.

The visitors raced into an early lead through Frankie Sutherland and doubled their advantage shortly after the break when Josh Rees poked home.

However, quick-fire goals from 17-year-old Serhat Tasdemir and hitman Rowe sealed a point for the hosts.

Team news:
Midfielder Callum Chettle will be hoping to make his Coasters debut this weekend after completing a loan move from Peterborough United this week.

As it stands, defender George Edmundson is unavailable for the trip after his loan spell from Oldham Athletic expired, however the club are working to renew the deal.

Midfielder Sam Finley will serve the second game of two-match suspension, picked up against Maidenhead United.

Attacking midfielders Henry Jones and James Hardy are both two to three weeks away from a return to first team action.

Admission:
Turnstiles open at 1:30pm, however the Ravens Bar will be open for home and away supporters from midday.