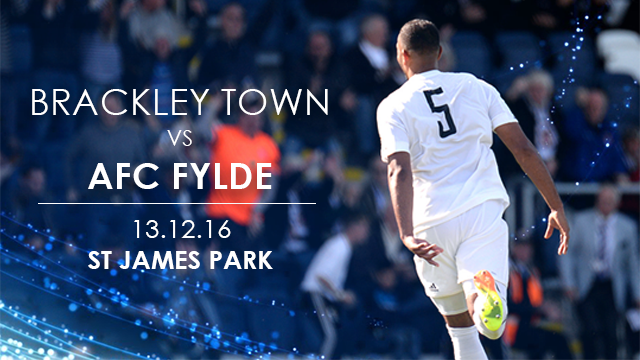 AFC Fylde and Brackley must do battle again for a place in the FA Trophy second round.

The two sides played out a 1-1 draw at Mill Farm at the weekend and face a replay with a trip to Stockport County in store for the winner.

Brackley visited Mill Farm for the second time this season following the opening day draw and the result was identical on both occasions.

The visitors took the lead, as they did in the first meeting, before Brendon Daniels levelled the scores with a fine set-piece in the second-half to set up a trip to Nottinghamshire for the replay.

The last four fixtures against Brackley have finished all square, with a 2-2 draw at Kellamergh Park last season followed up by a stalemate at St James Park back in April.

The last time there was a winner in this fixture was back in December 2014 when Fylde ran out 2-0 winners away from home courtesy of goals from Danny Rowe and Danny Lloyd.

Coasters boss Dave Challinor made several changes to his starting line-up at the weekend, with Caspar Hughes, Richie Baker, Matty Hughes and Matt Blinkhorn all coming into the side and may look to do the same with one eye on Saturday’s National League North trip to Gloucester City.

Full-back Macauley Wilson is again cup-tied for the match, whilst Sam Finley may miss out through illness.