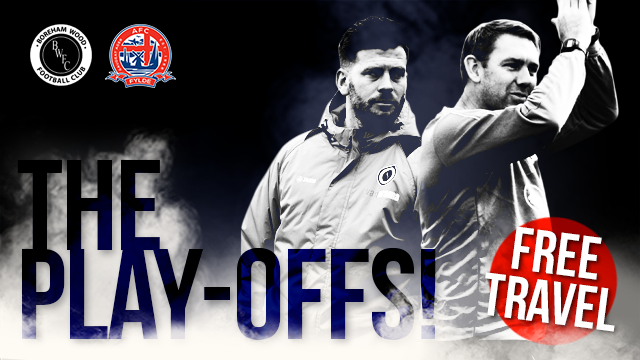 Well, it went right to the wire, but we now have our six play-offs contenders!

The Coasters secured their place in the end of season lottery with a goalless draw at Wrexham on Saturday, finishing above Dover Athletic – who bagged a last minute winner against Woking – on goal difference.

Boreham Wood now lie in wait for Fylde in the Play-Off Eliminator Round with the winner travelling to Sutton United in the Semi-Finals on Sunday.

Elsewhere, Aldershot Town host Ebbsfleet United with a trip to Tranmere Rovers up for grabs.

Much like Ebbsfleet, who won promotion from the National League South 12 months ago, Dave Challinor’s side have exceeded all expectations in their debut season in the fifth tier of English football.

Despite sitting 19th in the table following a 4-1 defeat at Tranmere on Boxing Day, the Coasters have stormed up the league and are now aiming for unprecedented back-to-back promotions.

Striker Danny Rowe narrowly missed out on the Golden Boot award, with his 24 National League strikes only bettered by Tranmere Rovers’ Andy Cook (26).

However, the Fylde frontman got his own back when he was voted the National League Player of the Year, 24 hours later.

Boreham Wood head into the Play-Offs in mixed form. Luke Gerrard’s side signed off from the regular season with a 3-1 win over basement club Guiseley, however they had suffered three defeats in their previous four outings.

Fylde had to settle for a share of the spoils against Boreham Wood back in August on the opening day of the season at Mill Farm.

The hosts got off to a dream start when defender Danny Woodards headed into his own goal, however Ricky Shakes levelled the scores on the stroke of half-time.

Boreham Wood completed the turnaround soon after the break through Kane Smith’s back-post header before Fylde debutant Jonny Smith came off the bench to fire home a stunning late equaliser.

The away encounter in December was considerably less spectacular – Angelo Balanta’s first-half strike proving the difference in a game of few chances.

Fylde are once again offering FREE TRAVEL to our supporters for the journey to North London. Six coaches, free of charge, made the trip to Wrexham last weekend, making it our highest-ever recorded away following of 503!

There is still time to book yourself onto the FREE travel for Thursday, please call 01772 598855 and ask for Gary or James.

Full-back Luke Burke will miss the match following his dismissal at Wrexham on Saturday. Fellow defender Jordan Tunnicliffe, who limped off in the first half in Wales, will face a late fitness test whilst youngster Serhat Tasdemir will not feature after picking up an ankle injury.

The match will be segregated and the gates will open at 5.30pm. Tickets can only be brought on the day, using the CASH ONLY turnstiles at the ground.

By Car: From M1 Southbound – Exit J4 to Edgware onto A41 (Watford by pass), Keep going straight over at the roundabout and two sets of traffic lights until you hit Apex Corner, turn left towards A1, over Stirling Corner, exit slip road into Borehamwood join A5135 at the third roundabout take 2nd exit into Brook Road, Broughinge Road is first turning on the right, after big car park.

There is still time to book yourself onto the FREE travel, please call 01772 598855 and ask for Gary or James.