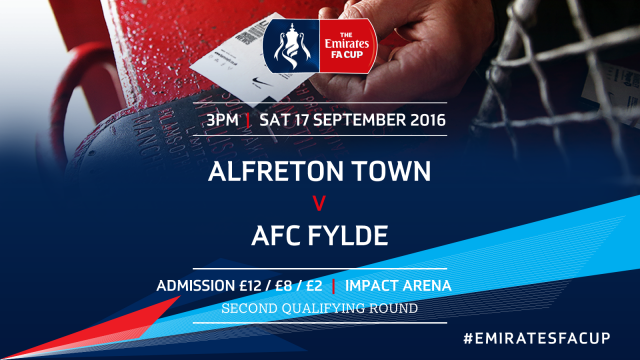 AFC Fylde return to the Impact Arena for the second time in under a month for the start of the FA Cup campaign.

The Coasters ran out 5-3 winners in the league last month against Alfreton with top scorer Danny Rowe netting four goals in a fantastic display.

Dave Challinor’s side have enjoyed much success in the FA Cup of late reaching the First Round proper in three of the last four seasons.

Last term, victories over Stockport County (1-0), Coleshill Town (9-0) and Barrow (1-0) culminated in a glamorous First Round tie with League One giants Millwall.

The Coasters did themselves proud in the narrow 3-1 defeat, whilst former full-back Alex Whittle netted a famous goal at The Den.

This weekend’s game will be the first ever FA Cup meeting between the two clubs.

Alfreton Town also boast an impressive record in the competition, twice reaching the Second Round proper over the last eight years. The Reds haven’t been knocked out in the second qualifying round in the last six years.

Coasters boss Challinor said: “I don’t envisage there being wholesale changes. It’s just another game, but I think that we’ve got a competitive enough squad to compete on more than one front this season.

“We’ve done well in the FA Cup over recent years and we want to do that again. However, it’s not our main aim. We’ve got momentum on our side at the minute. We’re doing well and picking up results and the last thing that we want to do is affect that in any way.”

Team news:
Sam Finley starts his three match suspension following his red card against FC United last weekend. Steve Williams should be fit to play after recovering from a slight knock. Brendon Daniels and Rhys Taylor are still a fortnight away from returning to action.

Travel:
By road:
From M1: Turn off at junction 28 onto the A38 towards Derby. Follow for two-miles then take the slip road onto the B600. Turn right at main road towards the town centre. After half-a-mile, immediately after Catholic Church on left, turn left into North Street. The ground is 150-yards down on the right.

By rail:
Leaving the station approach, turn right on Mansfield Road and up the hill towards the town centre. Take the second turn left onto Prospect Street (post office on left corner, chip shop on right). Continue for full length of Prospect Street. At top, cross Nottingham Road on a light-controlled pedestrian crossing. Facing you is a Roman Catholic church, North Street goes down the right-hand side of the church. 150 yards down, the ground is on your right, set well back. Approx. walking time from station is 15 minutes.