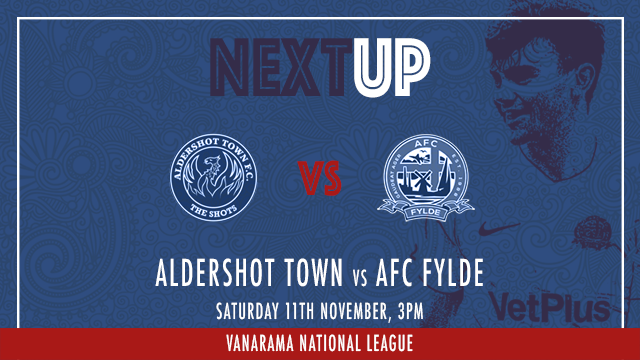 AFC Fylde turn their attention back to the National League this weekend after their FA Cup heroics.

The Coasters were rewarded with a glamour tie against League One giants Wigan Athletic having reached the second round of the competition for the first time in their history.

Goals from Danny Rowe (2), Jonny Smith and Sam Finley earned a 4-2 victory over rivals Kidderminster Harriers last time out to set up a live TV game against the Latics in three weeks time.

Dave Challinor’s side have also been going well in the league after a steady start to their debut National League campaign and head to Aldershot on Saturday on the back of consecutive victories.

The last league outing saw the Coasters thrash Solihull Moors 4-0 away from home – just four days after a textbook 2-0 victory over high-flying Wrexham.

Fylde are currently 17th in the table, six points above the drop zone and the same number away from the play-off places.

Challinor’s side have a real chance to climb the table this month, with five more league games over the next three weeks.

Saturday’s opponents Aldershot made an electric start to the season, winning their opening three fixtures, scoring 11 goals in the process and leading the pack. However, they have struggled to replicate their early form and now sit in 9th position, a point outside the play-offs.

Managed by Gary Waddock, The Shots have won just one of their last five games and suffered a 3-1 reverse at Barrow in their last league fixture.

Danny Rowe is a man in form for the visitors and will be looking to add to his 10 goals for the season when Fylde make their fifth trip down south this weekend (7 league, 3 cup).