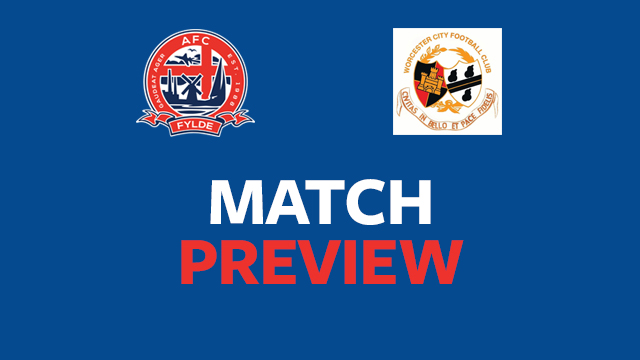 The Coasters are back in league action this weekend against Worcester City after their FA Trophy exploits of late.

Dave Challinor’s side booked their place in the last 16 of the competition following away victories over Skelmersdale United and Eastbourne Borough in the first and second rounds respectively.

Fylde netted eight goals in those two games, conceding just once, and now face a tough trip to National League side Gateshead in the next round.

The Coasters have been in fine form since the turn of the year, winning all four of their matches so far in 2016.

The year kicked off with a 1-0 victory over rivals Chorley at Kellamergh Park almost three weeks ago and Challinor’s troops have enjoyed three positive results on the road since.

Victory at Gainsborough Trinity last time out in the league saw the Coasters rise up to fourth in the table, but league leaders Solihull Moors have taken advantage of Fylde’s cup distraction to pull seven points clear.

Danny Rowe has been in fantastic form over the last four games bagging six goals in that time. Winger Danny Lloyd is another enjoying a purple patch and a goal on Saturday would bring him to 50 goals for the club.

Worcester have been enduring a difficult season and just one point in their last three league games sees them in 18th place, level points with clubs in the relegation zone.

A home defeat last weekend against fellow strugglers Corby Town will have been hard to stomach and brought the two clubs level on points.

Challinor has a full squad to pick from this weekend after the squad came through the trip to Eastbourne unscathed and said:

“It’s no coincidence that we have started to show glimpses of what we can do now that we finally have a fully fit squad. We took 19 players down to Eastbourne and we will again be in a position where we have to leave players out.

“We have been relying on Rowey for goals recently, so it was great to see a couple of others chip in last weekend.

“On paper, most people would say this is a very winnable game for us, but we are experienced enough to know that football doesn’t quite work like that.

“They are scrapping for points at the wrong end of the table, as Corby Town will be on Tuesday night, but we also want to close that gap at the other end.”