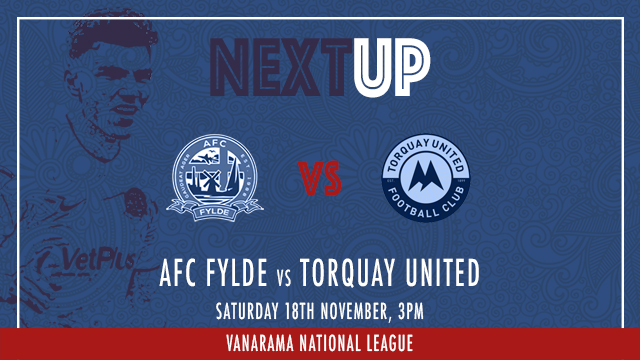 AFC Fylde switch back to National League action after a busy spell over the past fortnight.

The Coasters have been battling on three fronts of late, having progressed in the FA Cup and the Lancashire Senior Cup whilst continuing on their league charge.

Last time out the Coasters won through to the quarter-finals of the Lancs Cup against Bolton Wanderers. Matt Blinkhorn grabbed his first goals of the season before Henry Jones sealed a 3-1 victory at the County Ground, headquarters of the Lancashire FA.

The victory made it five from six in all competitions for the Coasters – the only blemish a narrow 2-1 victory away at Aldershot Town last weekend.

The Shots took a first-half lead at the EBB Stadium before Danny Rowe levelled the scores with a sublime finish shortly after the break – his eighth league strike of the season.

Dave Challinor’s side sit in 18th in the league standings, with five wins, seven draws and six defeats from their 18 fixtures.

Torquay have suffered a miserable start too the season and currently prop up the table level points with Solihull Moors. They have won just two of their 19 games and their 17 goals scored is the lowest in the division.

The Gulls have lost back-to-back games against Hartlepool United and Maidstone United – their last victory coming away at Ebbsfleet United three weeks ago.

Team news:
Starting tomorrow, Jack Muldoon will miss the next three league games following his dismissal at Aldershot, whilst Sam Finley picked up a one-match ban after receiving his fifth yellow card of the season. New man Andy Mangan, signed on loan from Tranmere Rovers this week, is expected to be involved.