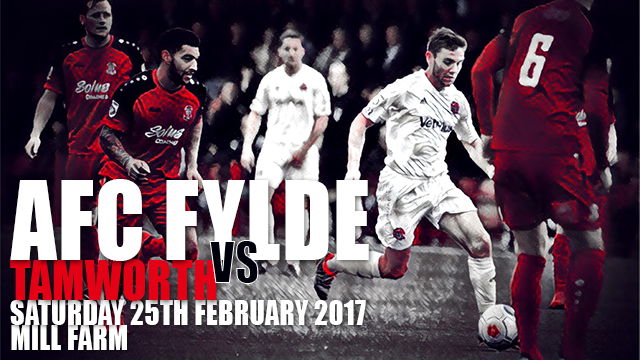 The Coasters will be out for revenge this Saturday as they take on play-off chasing Tamworth at Mill Farm.

The visitors were the first side to inflict defeat on Fylde this season when a solitary goal from top scorer Danny Newton ended our 15-match unbeaten start to the campaign.

After two games without a win, the Coasters were back to winning ways last time out with an impressive 3-1 victory away at Brackley Town. The result, coupled with Kidderminster’s defeat at Chorley, saw the Coasters move a huge ten points clear at the top of the National League North table.

The match was also notable for a couple of other positives. Firstly, Danny Rowe’s brace took his tally to an incredible 40 goals for the season – 37 in the league – to move him 22 clear of his nearest challenger … our very own Dan Bradley!

And secondly, there was a welcome return to the squad for midfielder Sam Finley who has missed the last three months with Ulcerative Colitis. The midfielder received a rousing reception as he came on five minutes from time and could yet play a key role in the run in.

Tamworth got off to a flying start to the season and spent time in the play-off places however their form has dropped off over the last couple of months and they have won just three of their last ten league games. Last time out they were beaten 1-0 by AFC Telford United.

The visitors will be without dangerman Reece Styche, who is serving the second game of a three-match ban following his dismissal against Brackley Town. Connor Taylor and James Belshaw are continuing their respective comebacks from injury and will be pushing for inclusion, however loan signing Brandon Fox remains sidelined.

Team news:
Both Steve Williams and Sam Finley returned to the squad last Saturday and manager Dave Challinor could have Dom Collins back for this weekend, although James Hardy and Josh Langley may miss out.